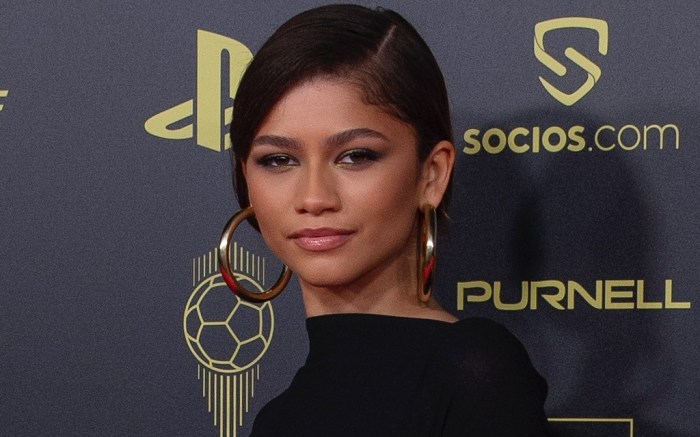 Zendaya brought electrifying style to the Ballon D’Or Ceremony in Paris this week.

The “Euphoria” star hit the red carpet with boyfriend Tom Holland on Monday evening. The event honors the top soccer player in the world from the past year for their accomplishments — 20201’s recipient was Lionel Messi, marking his seventh win. For the occasion, Zendaya dipped into the Roberto Cavalli archives for a dress from the brand’s fall 2000 collection. The sleek black number appeared conservative at first, due to its high neckline, long skirt and sleeves.

However, When Zendaya turned around she revealed its surprise statement: gold metal structured to look like a human spine, spread across an open back and accented with thin gold chains. The daring element instantly gave her chic outfit an edge, further accentuated by thick gold hoop earrings.

For footwear, the “Dune” actress chose one of her go-to styles: sharp Christian Louboutin pumps. The style featured black leather uppers and pointed toes, as well as the designer’s signature gleaming red soles. Zendaya’s pumps also featured towering stiletto heels totaling at least 4 inches in height, adding a bold height boost to her ensemble. The pair gave her look a chic finish, and further accentuated the daring back of her dress.

Pointed-toe pumps have become one of this year’s most popular shoes, now that live events and a desire for glamorous dressing have returned. The style gives most looks a sharper appearance, thanks to its thin heels and triangular toes. In addition to the actress, Lady Gaga, Olivia Culpo and Sarah Jessica Parker have also worn pointed pumps from Roger Vivier, Gianvito Rossi and Duchessa Gardini in recent weeks.

Aside from Louboutins, the former “Shake It Up” actress has also been spotted in strappy sandals, boots and pumps from top brands like Jimmy Choo, Roger Vivier and Casadei. She also serves as a frequent collaborator with fashion brands including Tommy Hilfiger, and also serves as a brand ambassador for Valentino, Bulgari, Lancôme and Covergirl Cosmetics. The actress has even ventured into design, launching her affordable Daya by Zendaya shoe collection in 2016. Zendaya has become a front-row fixture during Fashion Month as well, attending runway shows for Michael Kors, Vera Wang, Louis Vuitton, Rebecca Minkoff and others.

Check out the gallery below for Zendaya’s red carpet style evolution over the years.