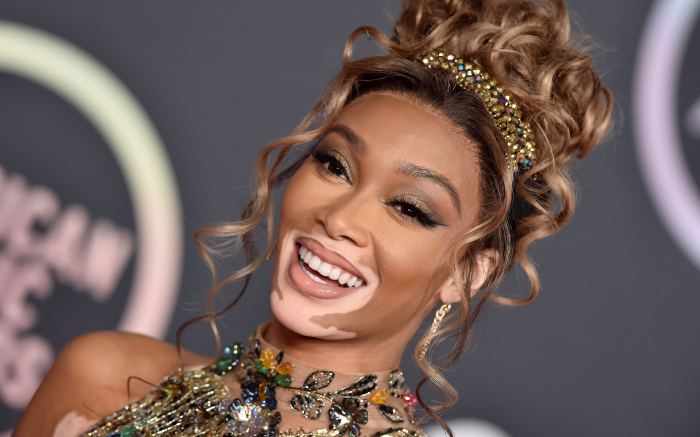 Winnie Harlow showed up and showed out last night at the 2021 American Music Awards.

The 27-year-old supermodel arrived on the red carpet wearing a sheer jeweled mini dress by Zuhair Murad. Harlow’s dress was emblazoned with intricate beads and rhinestones. The vision of celebrity stylist Jason Bolden, the couture ensemble featured a halter-style neckline and open back. Opting for neutral makeup, the star wore her blond locs in a loose high bun as curls framed her face. Harlow finished off the embezzled look with a studded headband and a pair of gold strappy heels. Open-toe heels were trending on the red carpet as many of the event’s guests embraced the silhouette. Harlow took to her Instagram stories to share closer details of her look for the awards.

Harlow is a big fan of bright jewels and colors. At this year’s Met Gala, she wore a sheer gold gown, sequined bra top with a black feather cape and a headpiece.

She has without a doubt changed the face of fashion. Since she was discovered by Tyra Banks on the 21st season of “America’s Next Top Model” she has continued to advocate for a more diverse and inclusive fashion industry.

See more stars on the red carpet at the American Music Awards 2021.