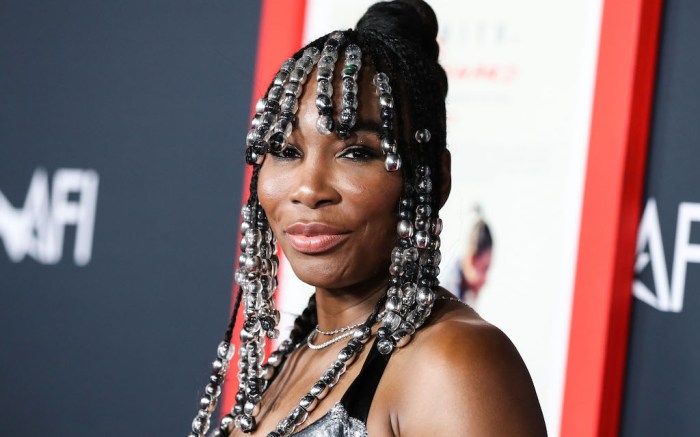 Venus Williams was a silver siren at the “King Richard” premiere at the 2021 AFI Fest in Hollywood, Calif., on Sunday.

The American tennis player, who attended the event alongside her sister Serena, showed her support for the new biographical film about their iconic tennis coach father Richard Williams, played by Will Smith.

Held at the TCL Chinese Theatre, she wore a silver lurex bias gown with a black silk satin halter strap by Bach Mai. The NYC-based designer recently debuted his first collection for spring 2022.

The seven-time Grand Slam champion held a black glitter clutch with silver-metallic and lucite sandals with rounded studs on her feet. Diamond chokers, bracelets, and rings added even more shimmer to the jaw-dropping look.

Venus Williams always brings the edge in her personal life as well as A-list events. She arrived at Louis Vuitton spring ’22 show during Paris Fashion Week last month in head-to-toe pieces by the house, including a sequined gold minidress layered under a puffer vest adorned with studs and a flattened collar. In addition to her box clutch purse, Williams’ included the wildest set of boots. The chic pair hit at mid-calf and featured a unique slouchy brown leather upper with a side zipper, resembling the sleeve of a motorcycle jacket. The silhouette, which debuted at the brand’s fall ’21 show earlier this year, also had a double buckled toe in contrasting shades and a towering wedge heel.

On the court, Williams of course opts for designs from her own EleVen by Venus label as well as Wilson, for which she serves as an ambassador.

See more of Venus Williams’ style through the years.

Step into silver sandals below.