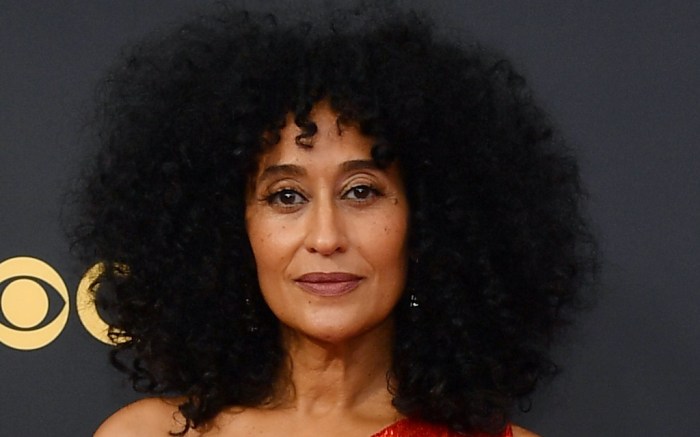 Tracee Ellis Ross dazzled on the red carpet at the 2021 Emmy Awards on Sunday night in L.A. wearing a look reminiscent of her superstar mother — Diana Ross.

The “Blackish” star, who is nominated for Outstanding Lead Actress in a Comedy Series, stepped out in a dramatic dress by Valentino. Her red one-shouldered gown featured a draped top over a long skirt, fully covered in glamorous sequins. Ross and stylist Karla Welch paired the sleek number with sparkling diamond stud earrings, rings and bangles.

With her voluminous curls and outfit’s nod to ’70s disco, Ross was the spitting image of her mom — one of the era’s most prominent musicians. The Grammy-winning singer’s style signatures like sequins, high-volume hairstyles and layered jewelry were all present in her daughter’s Emmys look, proving that iconic style can transcend decades.

Though they were concealed beneath her gown, Ross paired her dramatic dress with Christian Louboutin’s So Kate pumps. The red patent style featured sharp pointed toes, as well as 4-inch stiletto heels. When paired with Ross’ dress, the shoes created a monochrome red moment that was eye-catching and glamorous. Her pumps retail for $795 on NeimanMarcus.com.

Ross is one of the most-watched stars on the red carpet, due to her optimistic and bold personal style. Over the years, the Pattern Beauty founder has earned a reputation as an avid fashion lover and collector — and always makes a bold statement, whether at home or on the awards circuit. She’s also a frequent wearer of Christian Louboutin, having donned his pointed-toe pumps for years. Fashion-wise, Ross is a front-row fixture during Fashion Month, as well as a newly appointed global ambassador for Tiffany & Co.

The 2021 Emmy Awards returns in person tonight in Los Angeles with limited live audience of nominees and their guests. The awards show is hosted by Cedric The Entertainer.

Leading this year’s nominations is “The Crown” and “The Mandalorian” with 24 nominations each, meanwhile, “WandaVision,” “Ted Lasso,” and “The Handmaid’s Tale” followed closely behind. Style stars Anya Taylor-Joy, Cynthia Erivo, Tracee Ellis Ross and Billy Porter have also received nods at the 2021 Emmys.

Click through the gallery for more of the top red carpet moments from the 2021 Emmy Awards.