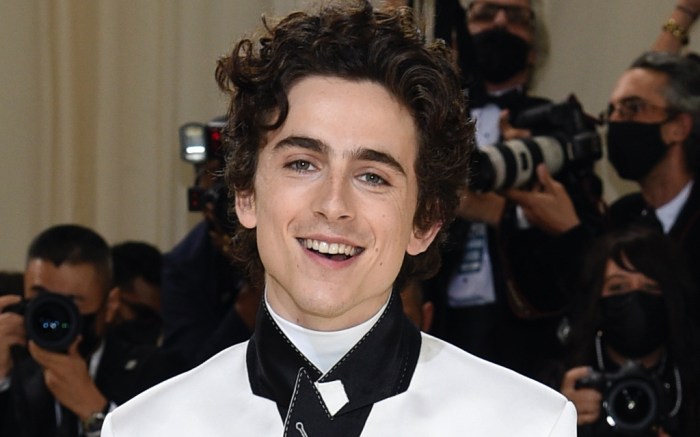 Timothée Chalamet just hit the red carpet at the Met Gala on Monday in New York wearing a custom suit and the ultimate American sneaker.

Instead of opting for brogues or oxfords, the Met Gala co-chair paired his suit with Converse Chuck Taylor All Star sneakers. The classic lace-up shoes were worn over tall white socks, which his suit pants were tucked into.

The “Dune” actor arrived at the “Oscars of fashion” in an ensemble by Haider Ackermann. The look featured a white double-breasted blazer with black lapels — which were non-traditionally turned upwards and folded over each other — that was worn over a white turtleneck top. The suit’s trousers were also a nontraditional take on tailoring, with a drop-crotch silhouette, loose cummerbund and two sparkling crystal pins.

Together, the sneakers and suit merged a modern take on classic tailoring with a staple shoe — and created a monochrome moment in the process. Chalamet’s sneakers retail for $80 on Ssense.com.

Converse Chuck Taylors are one of the most classic American sneakers on the shoe market. The shoes, which originally debuted in the 1920s, still remain one of the most popular sneaker silhouettes worldwide over a century later. Their versatility and relaxed nature have made them a top pick for a range of A-listers, including David Beckham, Nick Jonas and Ryan Reynolds.


Beyond on-trend sneakers and relaxed street style looks, Chalamet also has an impressive repertoire of red carpet ensembles. From sleek Ackermann and Tom Ford suits with Western-style boots to a satin Prada tracksuit and chunky brogues, the New York native knows a thing or two about standing out from the crowd — he even usually styles his own attire, opting against the norm of having a seasoned stylist for major events.

Each May, the annual Met Gala fundraising event celebrates the opening of the spring exhibition. This year, however, the Gala takes place in September after the 2020 event had been canceled due to the coronavirus. This year’s exhibition will be divided into two parts. The first segment, titled “In America: A Lexicon of Fashion,” will open on September 18. With a focus on the “modern vocabulary of American fashion,” it will honor the Costume Institute’s 75th anniversary. There will be a second Met Gala on May 2, 2022 in celebration of the exhibit’s second part, which will open May 5. The second segment of the exhibition is a collaboration with the Costume Institute and the American Wing, which will explore the development of American fashion through a more detailed historical lens.

To see all the red carpet arrivals at the 2021 Met Gala, click through the gallery.