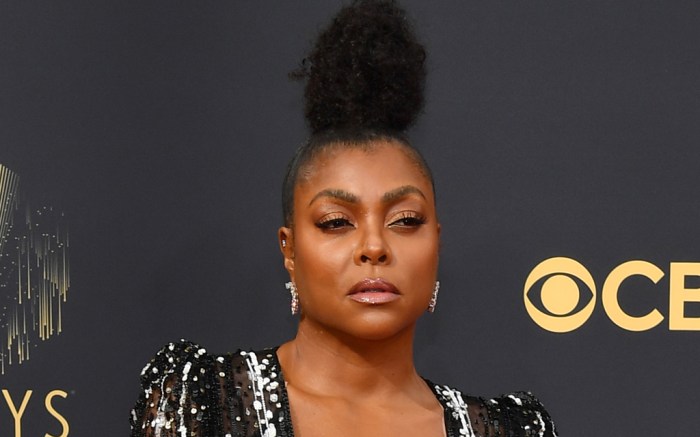 Walking the red carpet in Los Angeles, the “Empire” actress took the plunge in a statement-making gown this evening. The long-sleeve number comes courtesy of Elie Saab’s resort ’22 collection and includes a glittering sheer black fabric with silver detail work.

The real kicker of the actress’ edgy look came with her choice of footwear. Lifting the outfit was a set of towering platform sandals from Sophia Webster; the black suede silhouette features crisscross straps over the toe, a platform base and a securing ankle strap. The finishing touch for the shoe was an almost 6-inch heel formed with stacked round crystal beads in one of the night’s biggest statement shoes.

The 2021 Emmy Awards returns in person tonight in Los Angeles with a limited live audience of nominees and their guests. The awards show is hosted by Cedric The Entertainer. Leading this year’s nominations is “The Crown” and “The Mandalorian” with 24 nominations each, meanwhile, “WandaVision,” “Ted Lasso,” and “The Handmaid’s Tale” followed closely behind. Style stars Anya Taylor-Joy, Cynthia Erivo, Tracee Ellis Ross and Billy Porter have also received nods at the 2021 Emmys.

Click through the gallery to find even more of the best red carpet looks at the 2021 Primetime Emmy Awards.