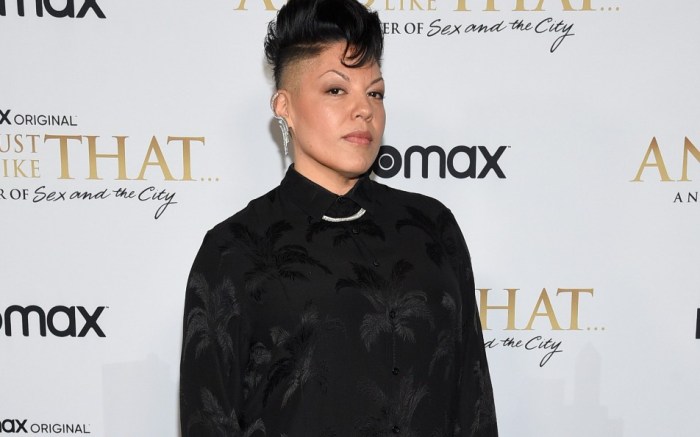 As the new chapter of “Sex and the City” kicks off, actor Sara Ramirez proved tonight on the “And Just Like That” red carpet premiere that an all-black ensemble is the best way to go.

The star wore loose-fitting head-to-toe black, featuring a button-up top and dress pants. The menswear-inspired silhouette fits the entertainer’s personal style. The ensemble was embossed with a floral, botanical print that gave the look a bit of textural interest and shine.

Ramirez also wore a plethora of shiny accessories, including a silver necklace, silver rings and a silver bracelet. Black nail polish with a silver accent nail tied the look together cohesively.

The former “Grey’s Anatomy” doctor sheds scrubs for a more fashion-forward role as Che on the reboot. As a series regular, Ramirez shares the screen with Sarah Jessica Parker, who reprises the lovable and uber-fashionable Carrie Bradshaw.

Ramirez sported black combat boots to finish things off. The shoes were shiny rather than matte and contained a black lace to match the black color scheme, and an apt choice as they complemented the look and were very walkable.

Read more on some of the best looks at the “And Just Like That” premiere.