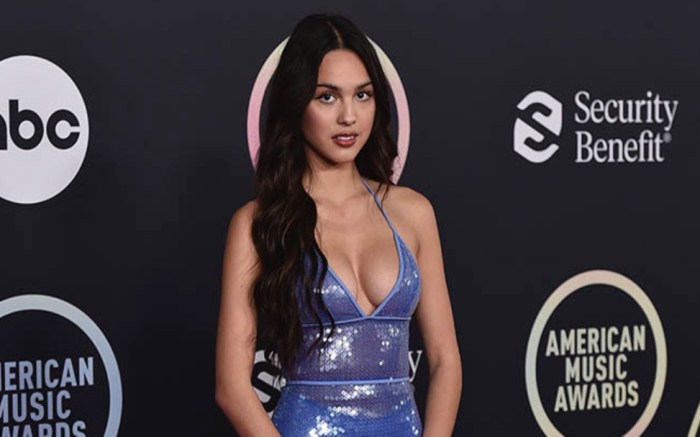 The “Sour” musician hit the red carpet in a dazzling gown by David Koma. The daring number featured a sheer silhouette composed of numerous purple sequins, complete with a lavender trim on the bodice and waist. Rodrigo’s ensemble was finished with a layered hem of lavender feathers, as well as layered rings and delicate earrings that added to her outfit’s glam factor.

The “Good 4 U” singer’s look was complete with mirrored sandals. Though the rest of the style wasn’t visible, it was clear that they featured curved toe straps. The pair likely featured heels totaling at least 3 inches in height. While making a bold statement on their own, the metallic silver pair accentuated the sheen in Rodrigo’s dress, adding to its dynamic effect.

The American Music Awards honor both established and independent musicians, as well as those who have broken records during the year. This year’s event, hosted by Cardi B, will take place at the Microsoft Theater in Los Angeles, California. Rodrigo has the most nominations of the evening with seven, followed by artists including The Weeknd, Doja Cat, Giveon and Bad Bunny. Unlike past ceremonies, several awards have already been announced on TikTok for Ed Sheeran, Lil Nas X and Taylor Swift.