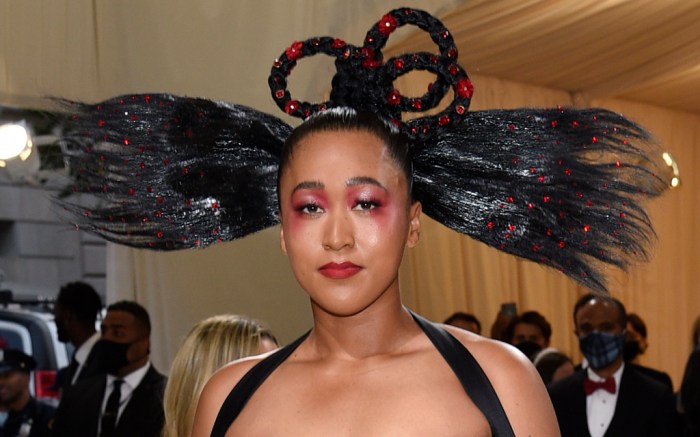 Naomi Osaka paid homage to her heritage at the 2021 Met Gala.

As one of the evening’s co-chairs, the tennis star arrived at tonight’s event in bold fashion alongside her beau Cordae. For the event, Osaka tapped Louis Vuitton — for which she serves as a house ambassador — in a custom gown inspired by her Japanese and Haitian roots. The look included a strapless printed base under a haltered puff-sleeve cape with tiered layering and a red bow to tie the outfit together.

On her feet, the Gen-Z star followed 1990s trends in a square-toe boot from the French luxury house. The patent leather pair included a statement buckle and a block heel for a sturdy lift.

The Met Gala — known as the fashion industry’s Oscars — was first introduced in 1948, two years after the Museum of Costume Art merged with The Metropolitan Museum of Art to become The Costume Institute in 1946. Each May, the annual fundraising event celebrates the opening of the spring exhibition. This year, however, the Met gala takes place in September after the 2020 event had been canceled due to the coronavirus.

Beyond her multiple championships, Naomi Osaka has partnered with Nike for a selection of apparel and footwear collections as well as to launch Play Academy with Naomi Osaka — a girls-only sports program in partnership with Nike and Laureus Sport for Good. The program aims to level the playing field by changing the game for girls, according to Osaka in an op-ed.

At just 23 years old, Osaka is also officially the highest-paid athlete in the world with 2020 earnings of $55 million, according to Sportico. Osaka also recently joined Louis Vuitton as a house ambassador for the French brand, starring in the brand’s spring ’21 campaign.

Click through the gallery for more red carpet arrivals at the 2021 Met Gala.