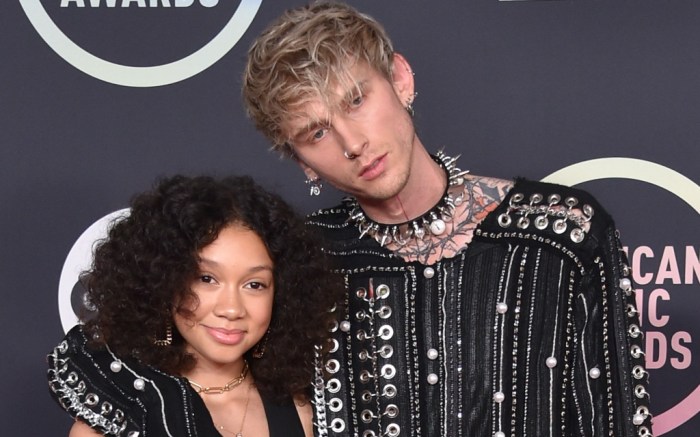 Machine Gun Kelly brought rock n’ roll glam to the red carpet at the 2021 American Music Awards—and made the occasion a family affair, accompanied by his daughter, Casie Baker.

The “Tickets to My Downfall” singer arrived in a custom black tunic top and trousers by Ashton Michael. The black long-sleeved top featured allover pearl accents, as well as crystals, dangling chains and sparkly embroidery on its right side. The piece’s left side featured eyelets linked with thin rings and silver chains, also lining both of its sleeves. When paired with his smooth trousers, the piece’s edgy glamour shone through—and was accented by a thick leather choker studded with spikes and pearls.

Baker’s ensemble smoothly complemented her dad’s, featuring a black gown with small side cutouts, delicate gold jewelry and a black velvet clutch. The duo made a dynamic pair on the red carpet together.

For footwear, MGK’s look was complete with a pair of black loafers. The style appeared to feature leather uppers, as well as rounded toes and thick platform soles. The style added a smooth finish to the singer’s outfit, while remaining monochrome and keeping his ensemble streamlined.