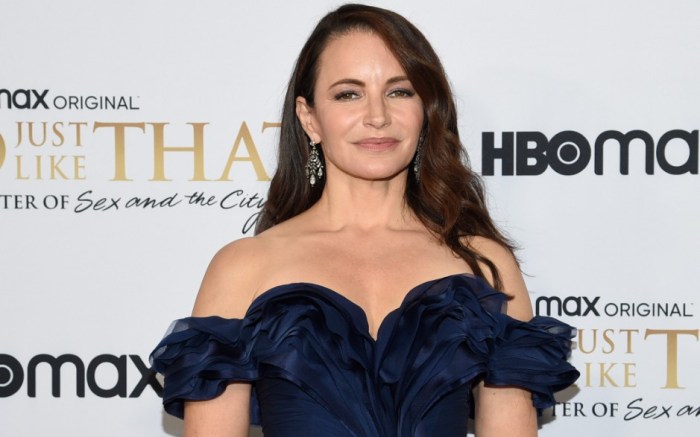 The cast of HBO Max’s “Sex and the City” reboot “And Just Like That” arrived on the red carpet for the series premiere in NY in sleek style. Actress Kristin Davis, who plays Charlotte York Goldenblatt, was no exception, stunning in a floor-length, deep blue gown.

The starlet’s dress hung off her shoulders, draping at her bust in a heart-shape, giving the dress a sweetheart neckline. The ruffles and gathered sleeves gave the otherwise flat dress dimension and texture. Davis also held a blue clutch with a silver clasp in her hand that matched the hue.

Davis’ shoes are not visible beyond her dress hem. However, the star shared a sneak peek at her footwear of choice on Instagram Stories—a pair of towering metallic Jimmy Choo platform sandals. Even when the cameras aren’t rolling, Davis plays a huge part in the consignment industry as the ambassador for popular second-hand store Goodwill. In her spare time, the actress also produces the popular drama and documentary “Gardeners of Eden” about a dying population of elephants in Kenya.

Her co-stars Sarah Jessica Parker, Cynthia Nixon and more joined her on the red carpet.

See more stars on the red carpet for the “And Just Like That” premiere.