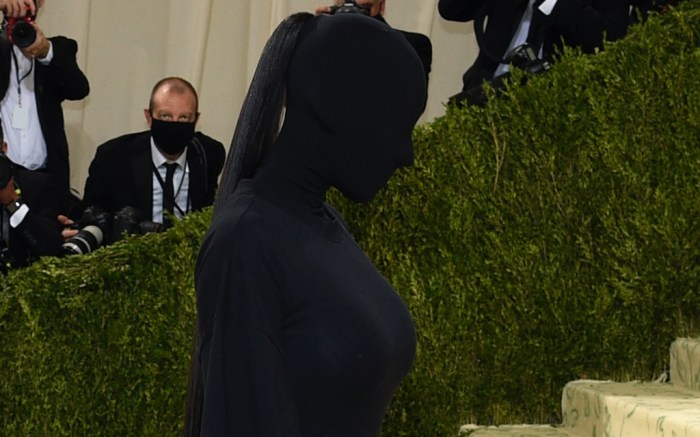 Kim Kardashian culminated her undercover outfit streak with a dramatic look at the 2021 Met Gala.

The media personality arrived at the “Oscars of fashion” in an all-black Balenciaga outfit by Demna Gvasalia. The ensemble was composed of a black bodycon minidress with 3/4-length sleeves. The number’s skirt featured a long train that was split in the center, forming a sharp V-shape as Kardashian walked up the Met stairs.

However, her look’s boldest element appeared to be a full-length stretchy bodysuit, which covered Kardashian’s hands, arms, and face — making her nearly unrecognizable. Her outfit was complete with a sleek high ponytail that nearly touched the ground. Gvasalia accompanied Kardashian in a similar all-black Balenciaga ensemble, composed of a fully covered face mask, hoodie, wide-legged pants and slippers.

For footwear, the former “Keeping Up with the Kardashians” star donned a pair of sharp boots, also by Balenciaga. The Knife style, which Gvasalia has popularized since his appointment at the fashion house, featured long pointed toes and stiletto heels totaling at least 4 inches in height. The boots appeared to be attached to the apparent bodysuit, creating a seamless effect that was fully monochrome.

Kardashian’s Met Gala look is the elevated version of the style she’s been spotted wearing in recent weeks. Kardashian was first seen at ex-husband Kanye West’s “Donda” listening event in August, wearing a slim-fitting top, trousers and full face mask by Balenciaga with a braided ponytail. While arriving in New York yesterday, she also wore a head-to-toe leather outfit composed of a zip-up top and trench coat with a zippered face mask — complete with a high ponytail. Both ensembles were composed of Gvasalia’s Balenciaga or Vetements pieces and featured over-the-knee Balenciaga boots.

Each May, the Met Gala is thrown as a fundraising event for the spring exhibition of the museum’s Costume Institute, which launched in 1946. This year, the Met Gala is taking place in September following the 2020 event’s cancellation. This year’s exhibition will be divided into two parts. The first segment, titled “In America: A Lexicon of Fashion,” will open on September 18. With a focus on the “modern vocabulary of American fashion,” it will honor the Costume Institute’s 75th anniversary.

There will be a second Met Gala taking place on May 2, 2022, to celebrate the exhibition’s second part that opens May 5. The second segment of the exhibition is a collaboration with the Costume Institute and the American Wing, which will explore American fashion’s development through a more detailed historical lens.

Click through the gallery for more celebrity arrivals from the 2021 Met Gala.