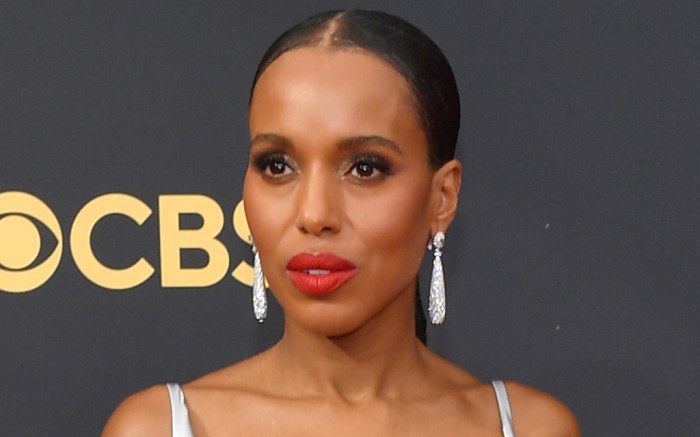 The “Scandal” actress tapped Law roach to help her style her ensemble for the evening, arriving at the show in Los Angeles in glam attire. The look, custom courtesy of Etro, featured a cowl neck, floor-sweeping hem and a cinched corset waist; the entirety of the design was formed from a silky glacier blue fabric for a glam appeal.

In addition to her designer gown, Washington herself also hid a custom set of Stuart Weitzman heels underneath the elongated hem to come to an elevated finish.

The 2021 Emmy Awards returns in person tonight in Los Angeles with a limited live audience of nominees and their guests. The awards show is hosted by Cedric The Entertainer. Leading this year’s nominations is “The Crown” and “The Mandalorian” with 24 nominations each, meanwhile, “WandaVision,” “Ted Lasso,” and “The Handmaid’s Tale” followed closely behind. Style stars Anya Taylor-Joy, Cynthia Erivo, Tracee Ellis Ross and Billy Porter have also received nods at the 2021 Emmys.

As for Kerry Washington herself, the “Little Fires Everywhere” actress taps everyone from Lavin and Christian Louboutin to Zuhair Murad and Loriblu for her red carpet attire. For more casual occasions, the star also models pieces from Ivy Park x adidas, J.Crew, Stuart Weitzman and more well-known labels.

Click through the gallery for more red carpet arrivals at the 2021 Emmy Awards.