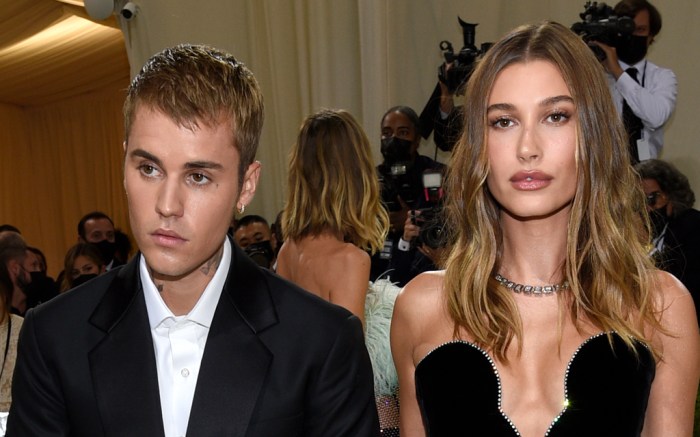 Leave it to Justin Bieber to make a major footwear statement on the night at the 2021 Met Gala.

The “Baby” musician arrived at the “Oscars of Fashion” tonight arm in arm with his wife Hailey Baldwin, both in black-tie attire. For the event, Bieber himself tapped what he called “la maison Drew” (also known as his label Drew House) suit complete with a tuxedo-style jacket and a modern twist on parachute suit pants. He also honored his own label by carrying a handbag branded with its signature smiley face logo.

The real kicker of the singer’s ensemble, though, was his choice of shoes. Instead of a classic dress shoe or brogue, Bieber instead broke out one of his go-to brand for casual footwear: Nike Air Force 1 sneakers. The Nike Air Force 1 ’07 sneaker first hit shelves in the 1980s and has since become a cultural icon and must-have footwear style for Gen-Z and above; from “Stranger Things” actress Millie Bobby Brown to TikTok star Addison Rae, these affordable and easy-going sneakers can be found in a variety of street-style inspired looks in younger and older generations.

The sneaker also taps into the theme of American heritage as they are one of the most recognizable and classic sneaker silhouettes across all industries. Made with smooth leather uppers and a chunky rubber outsole, the wallet-friendly pair retails for just $90 at Nike.com.


As for Justin Bieber himself, the “What Do You Mean” singer can typically be found in must-have sneakers from the likes of Off-White, New Balance and Nike with a few more dressed-up silhouettes from Gucci among others — but his true footwear passion centers around the colorful rubber uppers of Crocs. He partnered with the brand to create his own clogs in 2020 inspired by his own label and has a second collab with Crocs that was released earlier this year. Most recently, he starred in a Balenciaga campaign as the French brand debuted its newest sneaker silhouette.

Click through the gallery for more red carpet arrivals at the 2021 Met Gala.