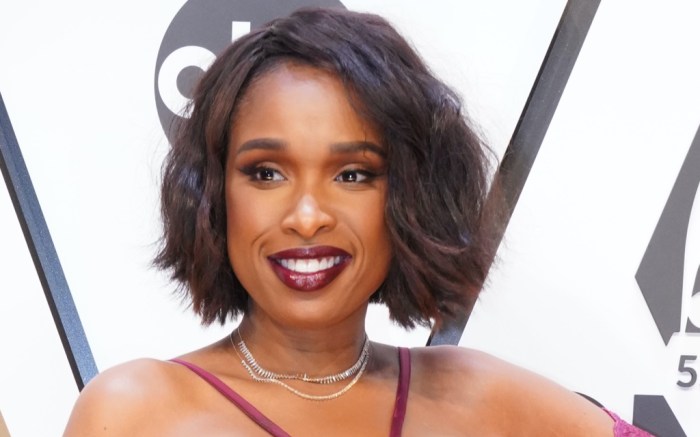 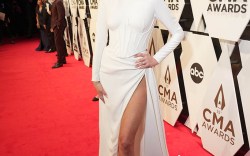 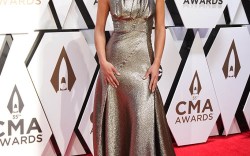 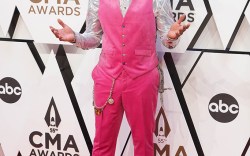 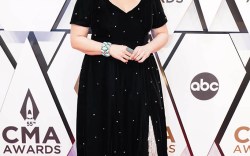 Jennifer Hudson’s latest outfit was undeniably daring, as seen at the 2021 CMA Awards.

The “Respect” star hit the red carpet in a bold ensemble featuring a dark pink lace catsuit. The one-piece garment featured a halter-neck silhouette, as well as an embroidered bustier top and scalloped edges. The piece was complete with a matching silk skirt, which draped over the catsuit and featured a flowing train for extra drama. Hudson finished her look with a pair of matching lace gloves, as well as layered sparkling necklaces.

When it came to shoes, Hudson wore a pair of sharp pointed-toe pumps. The style featured sparkly silver uppers, as well as stiletto heels that appeared to total at least 3 inches in height. The star’s footwear grounded her look with a major burst of glamour.

The Grammy Award-winning singer often favors statement-making strappy sandals and pointed-toe pumps by Giuseppe Zanotti, Sophia Webster and Jimmy Choo on the red carpet. However, she also wears footwear by emerging designers as well, like Titi Adesa — whose sandals she donned for an interview with Oprah Winfrey last month.

This year, Luke Bryan is hosting the event live from Bridgestone Arena in Nashville. Taking the stage tonight includes Jason Aldean and Underwood, Luke Combs, Miranda Lambert, Old Dominion, Chris Stapleton, and Chris Young and Kane Brown, among others. And leading the 2021 CMA Awards nominations are Eric Church and Chris Stapleton with five nominations, including Entertainer of the Year.