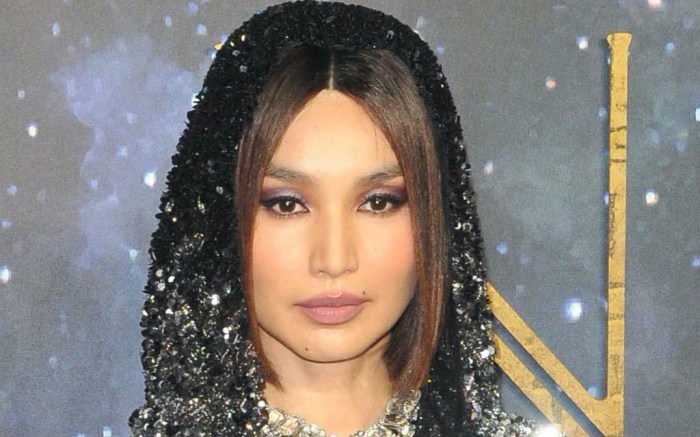 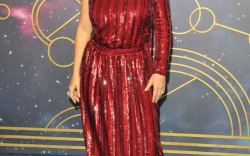 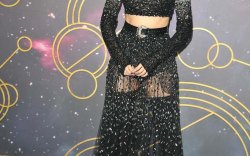 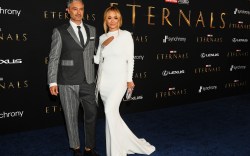 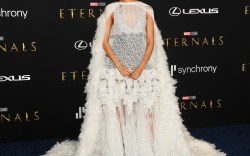 Gemma Chan took the transparency trend to new heights in her latest look at the “Eternals” London screening.

The “Crazy Rich Asians” star hit the red carpet in a sheer two-piece ensemble from Zuhair Murad’s fall 2021 couture collection, featuring a hooded crop top and flowing floor-length skirt. Both pieces, worn over a black bra and briefs, featured an ombre pattern of silver and black sequins for an added burst of sparkle.  Chan’s sleek accessories, composed of a black leather belt and layered crystal necklaces, smoothly coordinated with her look.

When it came to shoes, Chan chose a pair of thigh-high boots for the occasion. Her black leather pair featured daring stiletto heels that totaled at least 4 inches in height, as well las an open-toed silhouette. Though Chan’s boots were somewhat visible beneath her skirt, fans were able to see the shoes in action during a 360-degree photocall, captured on Instagram Stories by her makeup artist Alex Babsky.

Tall boots have become a go-to style for the fall season, offering greater coverage in colder months. Chan’s style is ideal for warmer temperatures due to its open-toed silhouette, though similar pairs can essentially be worn year-round. Tall boots have also been spotted on stars like Kim Kardashian, Rita Ora and Dua Lipa from brands like Balenciaga, Gucci and Miu Miu this season.

For footwear, Chan often dons sharp styles that coordinate with her red carpet or press ensembles. The “Captain Marvel” star has been spotted in pointed-toe pumps and sandals from Jimmy Choo, Louis Vuitton and Aquazzura over the years. While on the “Eternals” press tour, this trajectory has continued with footwear from luxury labels like Rupert Sanderson, Christian Louboutin and Amina Muaddi. These are worn with colorful ensembles from both emerging and established brands, including PH5, Prabal Gurung, Dion Lee and Burberry.

Click through the gallery to see more celebrities on the red carpet at the “Eternals” LA premiere.