Worst-Dressed at the 2021 Emmy Awards, According to You 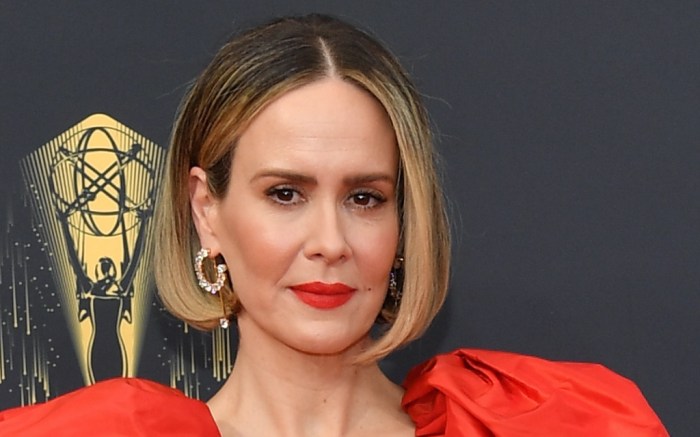 The 2021 Emmy Awards is always an occasion to make a statement on the red carpet. This year’s black tie affair featured an array of bold and statement-making looks — but not all of them were well-received.

While many applauded select celebrities for taking style risks at the star-studded event, others had doubts about many actors’ and actress’ chosen ensembles for the occasion. Fans took to Twitter to express their shock, surprise and confusion over a variety of celebrities’ outfits that appeared on the carpet throughout the evening.

From colorful suits to supersized sleeves, discover some of the 2021 Emmy Awards’ worst looks — according to Twitter users — below.

Aidy Bryant brought her quirky style to the red carpet in an embroidered dress by Simone Rocha, complete with platform sandals and a beaded red bag and headband. Though the cottagecore trend is still going strong, fans were shocked by its color palette and detailing.

Aidy Bryant is wearing the skirt from my Christmas tree… #Emmys

Not feeling Aidy Bryant's styling. She looks like a Christmas ornament. #Emmys

#Emmy winner Gillian Anderson reveals how her "Crown" cast mates and crew members are celebrating their wins at 2:00 AM in London https://t.co/yMFoUEO3Xo pic.twitter.com/OTyIlO9wQG

Gillian Anderson hit the red carpet in bold boho fashion, wearing a long white Chloé dress with a front cutout and beaded fringe. Though the daring nature of Emmy-winning actress actress’ look was applauded, many were puzzled by its artsy accents and potential inspirations.

I love Gillian Anderson. However, her dress looks like she didn’t have time to change after The Venice Beach drum circle.

She will never not be a goddess, but that dress looked like a plastic tablecloth.

Kenan Thompson brought an optimistic take on suiting to the red carpet in a pale pink outfit, worn with patent leather loafers. Though some liked the “Saturday Night Live” comedian’s choice of color, many found issues with its tailoring and silhouette.

“Kenan Thompson in a cotton-candy pink suit…At least he looks nice and bright and cheerful next to Seth Rogen’s muddy, depressing mess! 🌺😂👍 I’m having some issues with the fit, though. It’s not tailored right…But, I actually like the color on Kenan! It’s not bad!”

The “Flight Attendant” star went bold for the Emmys in a neon yellow Vera Wang dress (with pockets!) and Le Silla sandals. However, her gown’s’ ruffled accents and vibrant hue raised a few eyebrows online.

the ruffles on kaley cuoco’s dress look so stupid??? why are they different sizes???

Jonathan Groff veered away from the classic black suit for a different combination: a burnt orange Paul Smith jacket and trousers with a black shirt, tie and Jimmy Choo ankle boots. However, the star’s unique outfit prompted fans to question his styling choices.

Whoever dressed Jonathan Groff like the Ghost of Pumpkins Past should be ashamed of themselves. #emmys #redcarpet

Issa Rae made a bold statement at the Emmys this year, wearing a sparkling mesh dress by Aliette. While the “Insecure” creator looked confident on the red carpet, some thought otherwise. “She’s beautiful [and] stunning but this was NOT an #Emmys dress,” one user Tweeted.

I love her but this is a beach dress

Josh O’Connor attended the Emmys in a custom Loewe ensemble. The actor’s suit featured a cropped jacket with folded lapels and a bold flower accent in the place of a tie. His look was not favorably received by all fans — one even went as far as to call his outfit “ugly.”

Is Sarah Paulson hiding fugitives in the sleeves of her dress? My first apartment had less room than those sleeves. #Emmys

Sarah Paulson looks amazing but I hate that dress? #Emmys

Regé-Jean Page hit the red carpet in a dark Giorgio Armani look. His black double-breasted textured jacket, evening trousers and dark blue velvet loafers, however, didn’t strike a chord with all fans — some even questioned his outfit’s textures and exact color.

Okay, trying to see something here because it’s showing up differently on my screen & a friend’s: Is Regé-Jean’s suit

Click through the gallery to see all the celebrity arrivals from the 2021 Emmy Awards.