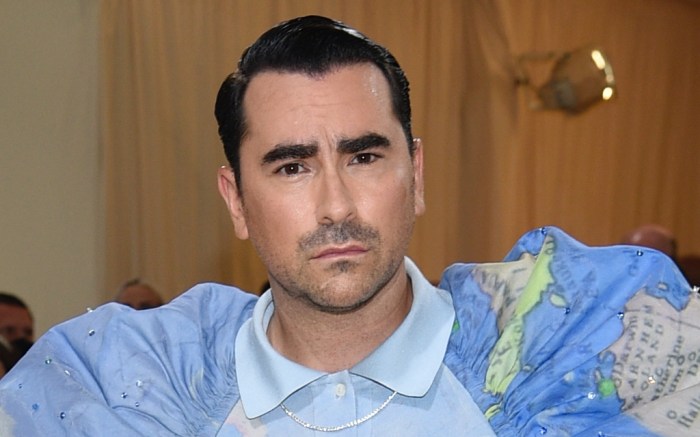 Dan Levy finally had the chance to wear his dream shoes at the 2021 Met Gala.

The “Schitt’s Creek” star hit the red carpet in a pair of boots by Loewe. The black leather pair, which came accessorized with thick buckled straps and bold gold studs, wasn’t just an edgy statement — it also held deep personal meaning to the actor. Levy revealed on Instagram Stories that the J.W. Anderson shoes — originally made by Loewe designer Jonathan Anderson for his namesake line — were ones he “scoured the Internet to buy” in 2010.

“Full circle moment to have him remake them for me last night,” Levy captioned a repost of Anderson’s photo of the boots, which were complete with blue and pink floral accents.

Levy’s boots also were part of an outfit that paid tribute to queer culture. The Emmy-winning actor’s Loewe ensemble featured an homage to two works by late gay artist David Wojnarowicz: Fuck You F–got F-cker and Untitled (One Day This Kid…).

Both pieces originally hailed from the late ’80s and early ’90s, during the peak of the AIDs crisis — allowing Levy’s outfit to also serve as a tribute to AIDS activism. The look featured a blue button-up shirt with voluminous puffed sleeves and trousers, with Wojnarowicz’s two artworks combined in intricate beading across the front. Levy’s outfit was complete with a white clutch printed with Wojnarowicz’s likeness, as well as Cartier jewelry.

This year, the Met Gala took place in September following the 2020 event’s cancellation from the coronavirus. The 2021 exhibition will be divided into two parts. The first segment, titled “In America: A Lexicon of Fashion,” will open on September 18. With a focus on the “modern vocabulary of American fashion,” it will honor the Costume Institute’s 75th anniversary.

There will be a second Met Gala taking place on May 2, 2022, to celebrate the exhibition’s second part that opens May 5. The second segment of the exhibition is a collaboration with the Costume Institute and the American Wing, which will explore American fashion’s development through a more detailed historical lens.

Click through the gallery for more celebrity arrivals from the 2021 Met Gala.