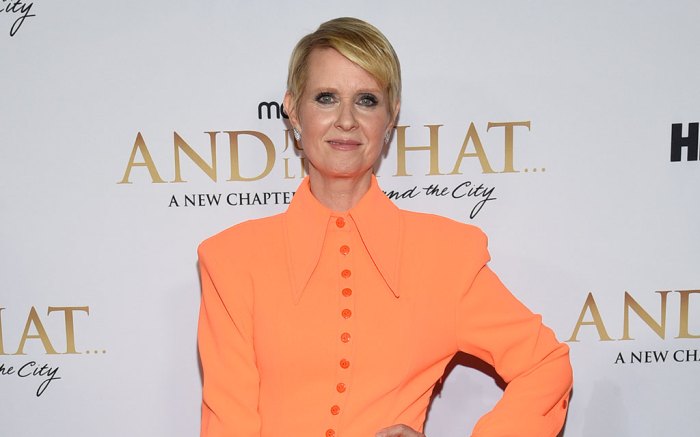 Cynthia Nixon brought a pop of color tonight to the “And Just Like That” premiere at the Modern Museum of Art in New York.

The 55-year-old made a case for monochrome orange at the event. She stepped onto the red carpet wearing a full-sleeved frock in a neon hue. The dress boasted a dramatic oversized collar and small darker-colored buttons that ran down the high neck of the dress to the lower half. When it came to her footwear, the star matched her gown with a pair of suede auburn pointed-toe boots with a zip that ran up the side and thin stiletto heels that gave her some height.

The “Ratched” actress let the ensemble speak for itself and opted for simple accessories. She sported a  pair of large, white, teardrop-shaped Boucheron stud earrings which featured a silver trim and detailing at the center. She wore two Boucheron statement rings on each hand and carried a black clutch with a jewel-encrusted trim.

Flip through the gallery to see all of the red carpet arrivals at the ‘And Just Like That’ premiere.