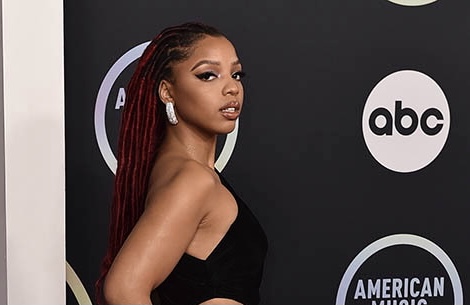 You can always depend on Chloe Bailey to bring the heat to a red carpet.

The “Have Mercy” singer arrived tonight at the 2021 American Music Awards wearing a black velvet gown complete with cutouts and a thigh-high slit by Monsoori.

Bailey’s Monsoori dress was fitting for the occasion as she has been making a name for herself in the industry and fashion world. Since going solo, she has been experimenting with new silhouettes, designers and colorful locs.

She tied her look together with a pair of black Jimmy Choo Romy pumps that featured a stiletto heel and diamond chains on the ankle. The Grammy Award winner accessorized her look with diamonds. She wore a pair of diamond cuff earrings, bracelets and rings. She also debuted a new hair color. The 23-year-old swapped out her usual blond locs for a fiery scarlet hue.

Bailey rose to prominence in 2012 as one half of the R&B sibling duo, ChloexHalle with her sister, Halle. Bailey is set to make her AMAs debut by performing her hit single “Have Mercy,” which debuted in September. Tyler the Creator, Olivia Rodrigo, Cold Play, BTS and Bad Bunny will also take the stage.

See more stars on the red carpet at the American Music Awards.