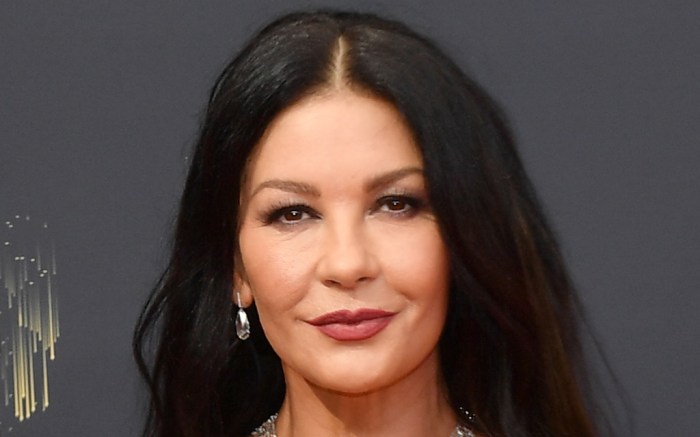 Catherine Zeta-Jones’ red carpet style is the gift that keeps on giving.

The “Chicago” actress arrived at the 2021 Primetime Emmy Awards tonight in Los Angeles on the arm of her husband and fellow actor, Michael Douglas. For the event, Zeta-Jones wowed in a strapless burgundy gown complete with a cinched waist, high-leg slit and dramatic train.

The ensemble also included a monochrome touch when it came to footwear. The “Mask of Zorro” alumna tapped Christian Louboutin for her footwear of the night, opting for a sleek satin twist on the French brand’s Pigalle Follies pumps. The pointed-toe heels include satin uppers and a towering over 4-inch stiletto heel.

Many stars tapped Louboutin for their footwear of the evening including Beanie Feldstein, Seth Rogen, Annie Murphy and Yara Shahidi.

The 2021 Emmy Awards returns in person tonight in Los Angeles with a limited live audience of nominees and their guests. The awards show is hosted by Cedric The Entertainer.  Leading this year’s nominations is “The Crown” and “The Mandalorian” with 24 nominations each, meanwhile, “WandaVision,” “Ted Lasso,” and “The Handmaid’s Tale” followed closely behind. Style stars Anya Taylor-Joy, Cynthia Erivo, Tracee Ellis Ross and Billy Porter have also received nods at the 2021 Emmys.

Click through the gallery to find even more red carpet arrivals at the 2021 Primetime Emmy Awards.