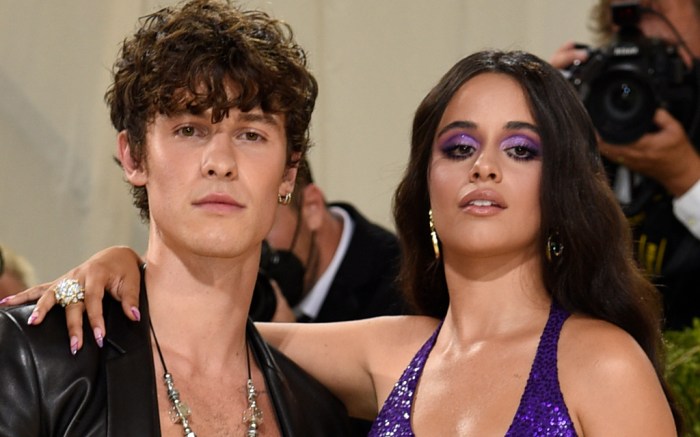 Camila Cabello and Shawn Mendes were one of the biggest couples to watch at this year’s Met Gala.

Tonight, the two singers arrived on the red carpet in a modern-day twist on retro fashion for the event at the Metropolitan Museum of Art in New York. For the event, Cabello herself modeled a purple glittering Michael Kors set complete with a crop top and high-slit skirt; complete with a fuzzy handbag and a wavy hairdo, the “Senorita” singer looked like a new-age Cher in an outfit that echoed her “Sonny & Cher” days.

Making Mendes the Sonny to her counterpart, the “Treat You Better” singer donned a metallic blazer and corduroy pants for his own sort of statement style. As for footwear, Cabello continued the monochrome appeal of her attire with purple Jimmy Choo platforms set atop a lifted heel as Mendes chose a unique black John Fluevog boot with a metallic block base.

As for Camila Cabello’s own style, the “Havana” singer tends to include footwear styles from a wide range of brands — think everything from Converse to Naturalizer to Ivy Park x Adidas to Christian Louboutin. When it comes to red carpet duds, the former X-Factor star prefers designs from Zuhair Murad, Versace and Givenchy amongst other major labels. She has also starred in campaigns for Guess and Skechers in the past.

Click through the gallery for more Met Gala arrivals on the 2021 red carpet.