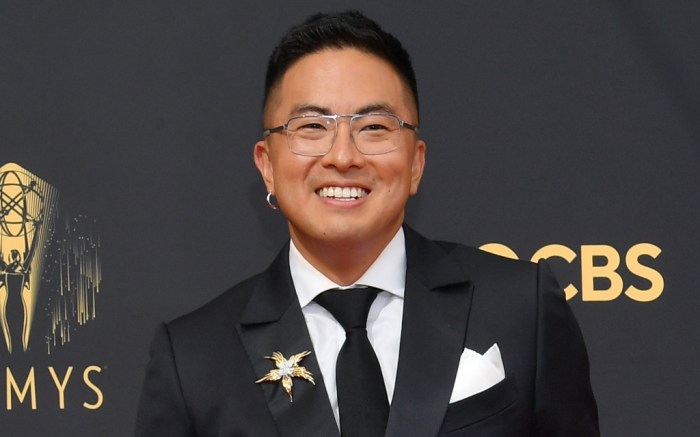 Bowen Yang arrived at the 2021 Emmy Awards on Sunday in Los Angeles in high-shine fashion.

For footwear, Yang stunned in a pair of silver platform ankle boots by Syro. The pair, which appeared to be a custom version of the brand’s popular Rancho boots, included a 2-inch high platform and 5.5-inch block heels. The style was complete with bold square toes. When paired with Yang’s elegant tux, his boots added a dose of drama to the traditional menswear look.

The 2021 Emmy Awards returns in person tonight in Los Angeles with limited live audience of nominees and their guests. The awards show is hosted by Cedric The Entertainer.

Leading this year’s nominations is “The Crown” and “The Mandalorian” with 24 nominations each, meanwhile, “WandaVision,” “Ted Lasso,” and “The Handmaid’s Tale” followed closely behind. Style stars Anya Taylor-Joy, Cynthia Erivo, Tracee Ellis Ross and Billy Porter have also received nods at the 2021 Emmys.

To see all the red carpet arrivals at the 2021 Emmy Awards, click through the gallery.