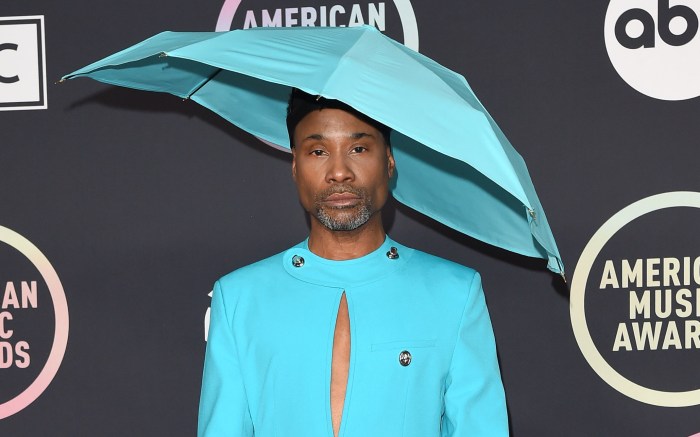 The “Pose” actor attended the star-studded awards show last night in Los Angeles, where he made a sleek but daring statement. For the ensemble, Porter sported a blue suit that featured loose but still structured tailoring. The jacket incorporated a slit cutout on the chest that added a little skin to mix while also having three distinct silver buttons placed around the piece. He accessorized the look with a matching umbrella hat, which brought the drama, and a host of different metallic rings.

For the shoes, Porter donned a pair of black patent leather platform heels that added a height elevation to the vibe.

When it comes to Porter’s essential style, he’s known to blur lines and promote a more gender-fluid aesthetic. On his Instagram feed, Porter opts for garments with effervescent patterns, printed mumus, dashing separates and ruffled separates. For footwear, the Broadway star typically sports pointed-toe boots, easy loafers, sharply heeled sandals and height-defying platforms. He creates fashion moments that generate new discussions about gender as it relates to fashion. In the past, Porter donned avant-garde pieces from brands like The Blonds, Christian Siriano and Sarah Sokol.

The American Music Awards honor both established and independent musicians, as well as those who have broken records during the year. This year’s event, hosted by Cardi B, will take place at the Microsoft Theater in Los Angeles, California. Olivia Rodrigo had the most nominations of the evening with seven and won an award, followed by artists including The Weeknd, Doja Cat, Giveon and Bad Bunny (who also won an award). Unlike past ceremonies, several awards have already been announced on TikTok for Ed Sheeran, Lil Nas X and Taylor Swift.

See more stars on the red carpet of the American Music Awards.