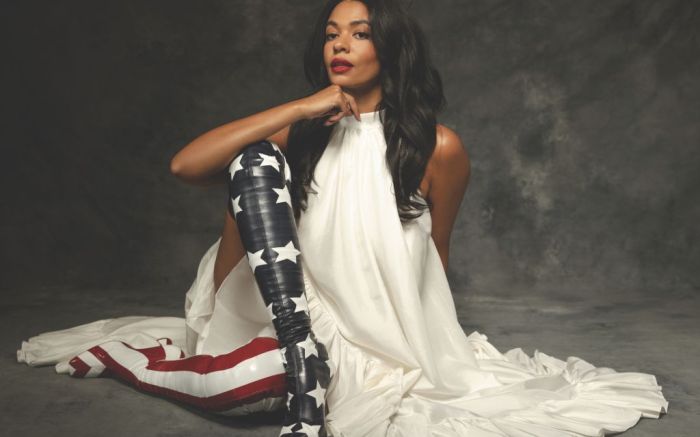 For this year’s theme: “In America: A Lexicon of Fashion,” James’ designed a white gown — worn by AOC — with the phrase, “Tax the Rich” in red. Both said they were inspired by the fact that they were working class women of color walking the red carpet at fashion’s most prestigious event, the Met Gala.

To complete the Look, James — founder of the 15 Percent Pledge, a nonprofit organization created by the designer to help boost Black brands — created a pair of red lace-up sandals, adorned with flowers along the heel.

This is not the first time James (a native Canadian) has used her platform to say something on the current state in America. Last year, she designed a pair of boots inspired by the American flag, which she wore on the cover of FN in December, “One big element of it is that I really feel that we need to make sure that we can, to some degree, reclaim and claim the American flag,” she told FN. “There are certain situations where it’s almost felt like it’s this partisan symbol, and it shouldn’t be that way. Because I think America at its best is a country that can work for everyone, if we are willing to actively do the work to make sure that it stays and is equitable for everyone.”

She added, “I don’t have to embrace this country as my own. I’m not originally from here. But I do feel, because I have created my business here, and in many ways have come of age here, that I have a responsibility also to this country. I genuinely love America.”