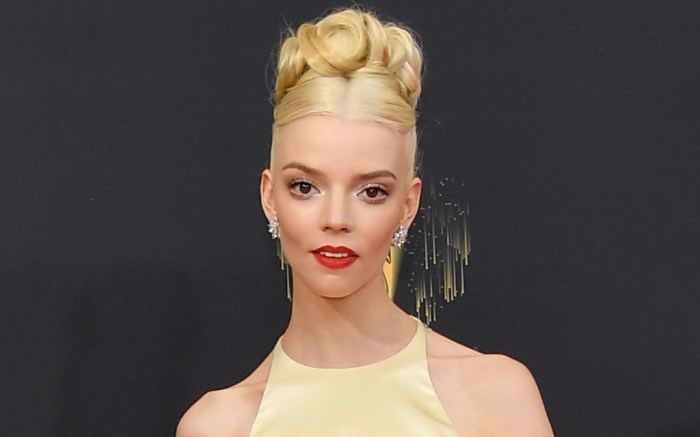 Anya Taylor-Joy just made her way to the 2021 Primetime Emmy Awards red carpet and is already in the fight for the evening’s best-dressed list.

The “Split” actress arrived at tonight’s show in Los Angeles in an outfit by Christian Dior. Keeping with a yellow theme, Taylor-Joy donned a couture gown from the French luxury house featuring a bold backless cut; the two-piece silhouette also included a voluminous draped satin skirt and elegant touches with pearls across the back for a finishing touch.

The 2021 Emmy Awards returns in person tonight in Los Angeles with a limited live audience of nominees and their guests. The awards show is hosted by Cedric The Entertainer.  Leading this year’s nominations is “The Crown” and “The Mandalorian” with 24 nominations each, meanwhile, “WandaVision,” “Ted Lasso,” and “The Handmaid’s Tale” followed closely behind. Style stars Anya Taylor-Joy, Cynthia Erivo, Tracee Ellis Ross and Billy Porter have also received nods at the 2021 Emmys.

When she isn’t in statement designs from Dior, you can find Anya Taylor-Joy herself in pieces from Rodarte, Bob Mackie, Zimmermann, Vivienne Westwood Couture and more top brands. As for footwear, it’s every from Miu Miu pumps on the red carpet to relaxed Ugg boots when lounging off-duty. The “Queens Gambit” actress can also be spotted front row for brands like Armani, Miu Miu, Christopher Kane, and Gucci. She’s also was tapped as a brand ambassador for Tiffany & Co.

Click through the gallery for more red carpet arrivals at the 2021 Primetime Emmy Awards.