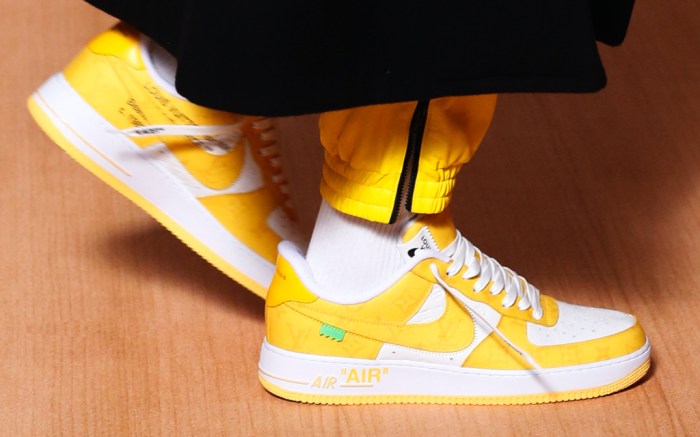 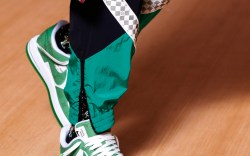 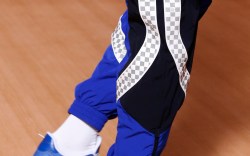 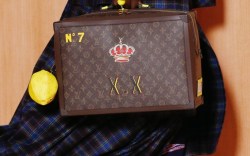 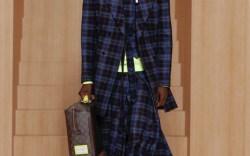 Louis Vuitton’s menswear is getting sporty for spring ’22, thanks to a new collaboration with Nike.

The classic white leather Air Force 1s within the collection were all revamped with Abloh’s colorful design tendencies. Similarly to the designer’s past Nike x Off-White collaborations, various words in quote marks — one of the designer’s signatures at his brand — are seen throughout. The sneakers’ soles boast “Air,” while the laces are marked with “Lacet” (the French word for “laces”). The laces are reminiscent of the “Shoelaces” laces from Abloh’s collaborations on the sportswear brand’s Air VaporMax, Zoom Fly SP and neon Air Force 1 styles, seen in his 2017 “The Ten” design project, where he redesigned 10 signature Nike sneakers.

Added details from Louis Vuitton’s Air Force 1s include tongues with co-branded patches, as well as neon green tags on the sides of each shoe. The leather Swoosh logos and uppers have also been printed to feature Vuitton’s staple “LV” logo, in hues of red, indigo, yellow and green, with color-coordinated soles.

Other versions of the shoe are given a more monochrome or graphic treatment. One style features two tones of olive green suede, embossed with Vuitton’s logo and gold co-branded lettering on the sides. Another model in a sleek blue leather boasts a red-and-blue sole and gold Swoosh logo, similarly embossed with the French brand’s symbol. However, one version of the shoe best illustrates the collaboration’s core message. Featuring an exaggerated tongue, gray and white checkerboard print reminiscent of Vuitton’s Damier Azur canvas bags, and a colorful graffiti graphic, an especially bold Air Force 1 visually shows the merging of Vuitton’s heritage with Abloh’s streetwear style — and the merging of different generations to create something new.

This is the latest Nike project for Abloh, who just announced a “Dear Summer” collection of the brand’s Dunk Low sneakers in 50 colorways with Off-White this month.

No release date has been announced yet for the sneakers.