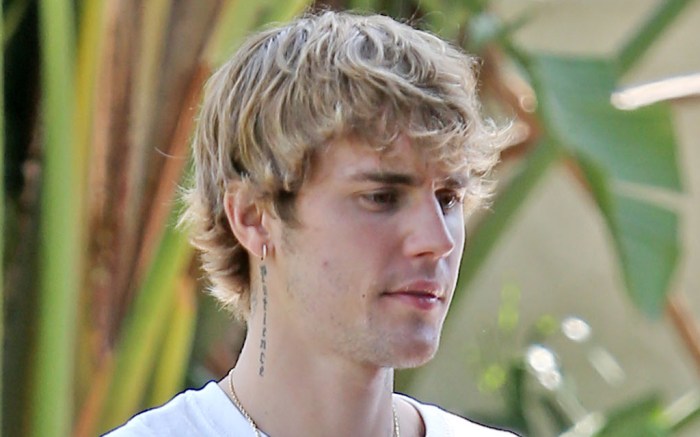 Taking to Instagram this afternoon, the musician posed alongside Daniel Caesar and Giveon, who both will be featured on the song as well, on set for their upcoming music video. Bieber himself chose to pay homage to the name of the single with a 1970s-inspired peach suit layered over a coordinating tank top with a matching headband to finish.

When it came to footwear, the “Baby” singer also tapped a retro silhouette. The Nike Air Force 1 ’07 sneaker first hit shelves in the 1980s and has since become a cultural icon and must-have footwear style for Gen-Z and above; from “Stranger Things” actress Millie Bobby Brown to TikTok star Addison Rae, these affordable and easy-going sneakers can be found in a variety of street-style inspired looks in younger and older generations.

On his 27th birthday earlier this month, Bieber himself was spotted wearing the sneakers once more as he arrived at a Louis Vuitton store in Paris to film a new music video. Stepping out in style, Bieber opted for a cozy Isabel Marant sweater layered over a classic baseball-style T-shirt and baggy cargo-style jeans.

Cargo pants, as well as retro-chic tees, are both experiencing a moment on the fashion scene amidst revitalizations of late 1990s and early 2000s trends such as combat boots and low-rise bottoms.

As for Justin Bieber himself, the “What Do You Mean” singer can typically be found in must-have sneakers from the likes of Off-White, New Balance and Nike with a few more dressed-up silhouettes from Gucci among others — but his true footwear passion centers around the colorful rubber uppers of Crocs. He partnered with the brand to create his own clogs in 2020 inspired by his own label and has a second collab with Crocs that released yesterday.

Click through the gallery to find more of Justin Bieber’s bold footwear looks over the years.