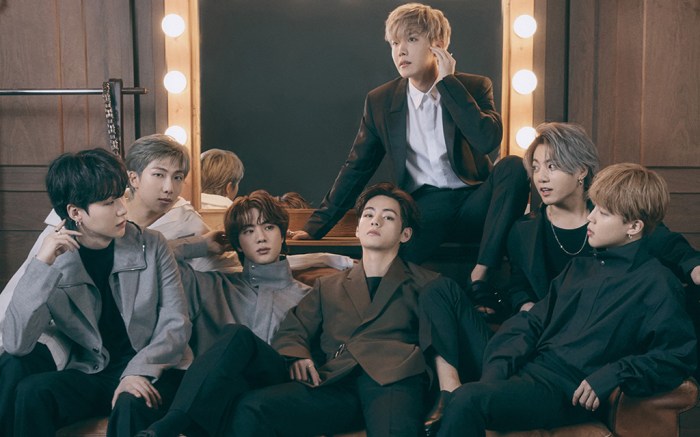 The South Korean band appeared on the cover for the first time for its “Future of Music” issue. The group — made up of V, RM, Suga, J-Hope, Jimin, Jungkook and Jin — spoke on everything from race and identity to their journey into fame, while maintaining a humble nature and good humor throughout.

For the cover shoot, the seven members all posed decked out in only Louis Vuitton. The French fashion house tapped BTS as its latest house ambassadors last month, creating a legendary partnership that broke the Internet.  The Grammy-nominated group is set to work with menswear artistic director Virgil Abloh and the luxury line as a whole for expected campaigns, collections and more projects to come.

“The labels of what being masculine is, is an outdated concept,” said RM in the interview. “It is not our intention to break it down. But if we are making a positive impact, we are very thankful. We live in an age where we shouldn’t have those labels or have those restrictions.”

In another image for the article, the musicians showed off the versatility of their style in a mix of brands. Suga modeled Givenchy shoes as did J-Hope and Jungkook while Jin and V broke out their Prada footwear. RM diverged from the pack in an InstantFunk pair while Jimin modeled shoes courtesy of System Homme.

“We are outliers, and we came into the American music market and enjoyed this incredible success… Now, of course, there is no utopia,” continues RM. “It’s our hope, too, that people in the minority will draw some energy and strength from our existence. Yes, there’s xenophobia, but there are also a lot of people who are very accepting. . . . The fact that we have faced success in the United States is very meaningful in and of itself.”

BTS, who also has ties to Fila, comes with a cult following across the globe, earning its members a series of chart-topping hits in the United States, endless sold-out arena shows and even the title of Time’s Entertainer of the Year 2020. For example, the news of its Louis Vuitton deal caused search engine traffic to surge around the partnership over 3,000% with the announcement trending across all social media all around the world.

“I don’t think I’ve ever really thought of being not a part of this group,” adds Jimin at the end of the article. “I can’t imagine what I would do on my own. I think when I become older, and I grow my own beard, I would like to think that at the end, when I’m too old to dance, I would just like to sit onstage with the other members and sing and engage with the fans. I think that would be great, too. So I’d like to keep this going as long as I possibly can.”

Click through the gallery for more of BTS’ top style moments.