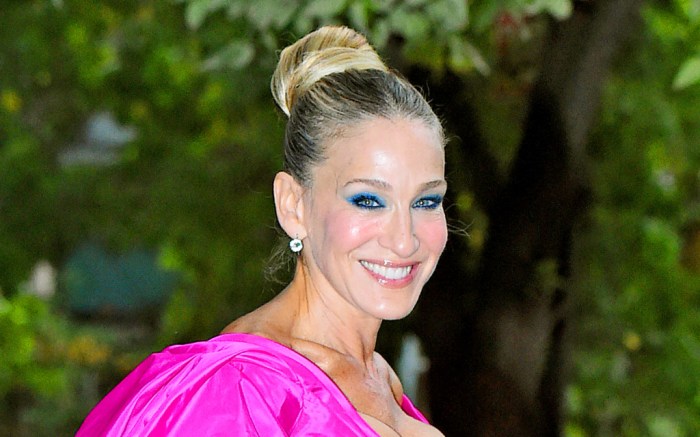 Sarah Jessica Parker has just brought up a painful memory for “Sex and the City” fans.

On Monday, SJP took to Instagram to share a photo of pair of chewed up Manolo Blahnik heels. “Unearthed. @JustLikeThatMax X, SJ,” Parker captioned the post, tagging the series reboot.

As viewers recall, the turquoise stunners, which feature chocolate straps and white buttons, are none other than the pair Carrie Bradshaw once owned — that is before they were eaten by her ex-boyfriend Aidan Shaw’s dog Pete.

The heels met their unfortunate fate during season 4 of the hit series when Aidan had moved in with Carrie after got together for a second time. Carrie and Aiden were arguing over the sex columnist having too many shoes when she noticed Pete going to town on her heels in the bathroom. “That dog owes me $380!” Carrie said during the scene.

Fans quickly recognized the shoes in the comment section of the post with one social media user writing, “Peeettteee! You can’t buy it it’s circa 1996!”

“Are these the shoes Pete ruined????” another said. “Aweee peteee… don’t even show it to me!'” said another, quoting Carrie.

As more reactions piled in, Parker expressed that she was touched. “I just cannot get over how much everyone knows and recalls… It astounds and touches me. Deeply! X,” she wrote in the comment section.

Carrie had an unbreakable bond with Manolo Blahnik throughout the series. The designer was her label of choice — and became an obsession she was even judged for. During season 6, Carrie attended a friend’s party and was forced to take her Manolos off. At the end of the event, Carrie’s shoes were missing and the incident caused a tension in her friendship with the party host, who told her spending thousands of dollars on shoes was frivolous. In the end, however, Carrie was reimbursed for the pair and the episode was fittingly titled “A Woman’s Right to Shoes.”

Another memorable Manolo moment came during “Sex and the City: The Movie” when Carrie and her longtime on-and-off again boyfriend Mr. Big reunited in the lavish New York City apartment they had purchased together before Big got cold feet at their wedding. Carrie had left her Hangisi satin pumps in the custom closet Big built for her before their split. When she went to the space to pick it up, Big was there and they rekindled their romance by Big placing the sleek cobalt blue heels on her feet.

As we anticipate the revival, we can assume there will be more Manolo sightings in the reboot. Parker announced that the series was making a comeback in January.

“I couldn’t help but wonder… where are they now? X, SJ @HBOMax @JustLikeThatMax #AndJustLikeThat #SATCNextChapter,” Parker captioned an Instagram post, confirming the news. In the teaser, video of New York City is shown before the clip transitions to a computer screen that reads “And just like that…” and “The Story continues…” with Parker narrating.

The revival will star Cynthia Nixon (Miranda Hobbs) and Kristin Davis (Charlotte York). Kim Cattrall, who played Samantha Jones, will not be returning.