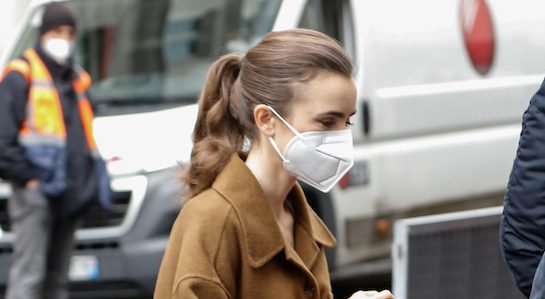 Bonjour, ma cherie! “Emily in Paris” is officially coming back to Netflix for its second season. The show’s Instagram previewed a glimpse into season 2, as well as Emily (Lily Collins)’s upcoming looks by iconic costume designer Patricia Field.

In the most noteworthy shot, Collins can be seen in a ruffled purple high-low dress. The bold piece features a tiered skirt and deep layered neckline. Her look is paired with pink sunglasses, plus layered necklaces and bracelets for a bohemian effect. On her feet, the PR maven wears metallic platform sandals, which feature multicolored straps and heels totaling at least 4 inches in height.

“Emily in Paris” focuses on the misadventures of Emily (Collins), a young Chicago woman who moves to Paris as a social media strategist — and becomes an influencer in the process. Along the way, she begins learning more about French culture, as well as finding romance and navigating the world of public relations. No plot details for the second season have been shared yet, though it’s clear from social media that a good time was had by all. “So excited to be sharing the screen with this incredible cast,” Collins captioned a similar post previewing season 2 stills.

Though “Emily in Paris”‘s second season doesn’t have a current release date, it’s anticipated to drop sometime in 2022.