Carrie Bradshaw Finally Wears Flats on ‘And Just Like That’ 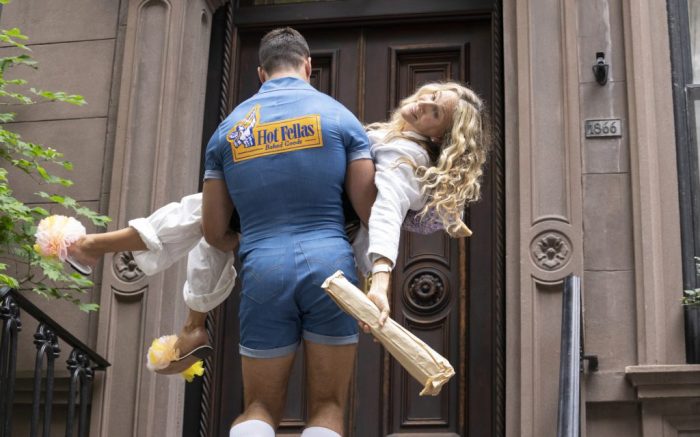 And just like that, Carrie Bradshaw is wearing flats. Well, at least while recovering from hip surgery.

“Tragically Hip,” the fifth episode of “Sex and the City” reboot series “And Just Like That…,” finds Carrie (Sarah Jessica Parker) undergoing hip surgery. Initially beginning the episode in a pair of silky green mules, the columnist quickly learns of her need for surgery and—through Charlotte (Kristin Davis)—the resulting “problem”: while recovering, she can’t wear heels.

“Do you even own a flat shoe?” asks Anthony Marantino (Mario Cantone) over a pre-surgery lunch. “Yes, I bought a pair of Toms in 2007,” jokes Carrie, a frequent wearer of sky-high heels from Manolo Blahnik, Christian Louboutin and Dior.

Carrie’s aversion to flat shoes continues throughout the episode, as she wears a pair of “unsettling” olive green Birkenstock sandals with white tube socks in the hospital waiting room. “From here down, I look like a Vermont art teacher,” Carrie jokes to Miranda (Cynthia Nixon).

However, leave it to Carrie to make flats her own. Post-surgery, the fictional author can be spotted in a pair of ruffled Tomo Koizumi x Emilio Pucci slides. She also wears a metallic gold pair while recovering at home.

The tulle slides especially have a starring moment when Carrie’s carried up her iconic brownstone’s steps by a muscled baker from Anthony’s “Hot Fellas” business—images of which went viral this September. The $226 pair—on sale from $565—features orange, pink, yellow and white tulle straps atop flat white leather soles.

Heels are such a high priority for Carrie that she makes wearing them her ultimate post-surgery goal. Appearing at therapy in flat slingback Oxfords, Carrie shares this with her therapist, Travis (Ryan Cooper), when asked about her long-term physical goals. “To get back into heels,” she shares, even repeating herself to drive her point farther home.

And get back into heels she does—in fact, a memorable set from “Sex and the City 2.” Eagle-eyed fans will recall Carrie wearing sparkly gold Christian Louboutin pumps with 4-inch stiletto heels in the film’s opening scene. Though they’re sold out, her glittering Pigalle Follies still make a dramatic statement three months after her surgery, just like they did in 2010—especially when paired with an equally sparkly multicolored dress.

Though Carrie took a brief turn for flats, her trademark heels aren’t going anywhere. Stilettos and platforms from brands like Aquazzura, Isabel Marant and—of course—Blahnik will be in her wardrobe in future episodes of the stylish show.

Now, we couldn’t help but wonder: what shoes will Carrie wear next?