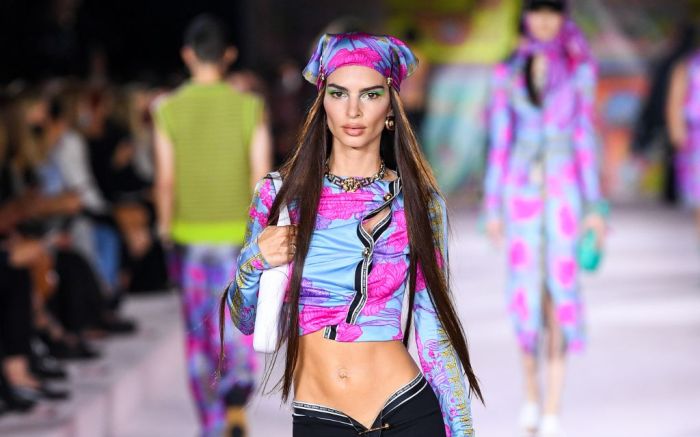 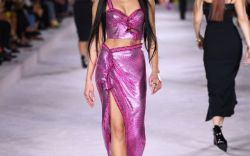 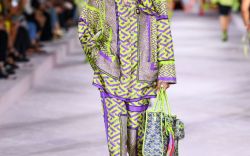 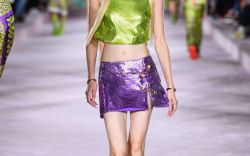 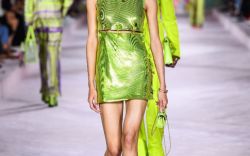 For anyone looking for that great big comeback of in-real-life runway shows to resuscitate fashion, look no further than Versace for a full on defibrillation.

The Italian fashion brand held its first in-person women’s runway event for its women’s collection since February 2020, and to mark the occasion creative director Donatella Versace spared no expense, packing it full of celebrity cameo runway appearances (Dua Lipa, for starters) and making the fashion as big and bold as possible (if it’s possible to make Versace any more over the top).

The fashion itself was a party, too, and one with a distinctive ’90s-into-Y2K direction:  Underneath a giant silk canopy that resembled Versace’s signature baroque scarf motifs, models walked the runway showing off women’s and men’s looks done in the bright, slightly-futuristic pop color lens that undeniably defined the look of late ’90s fashion and music iconography. In addition to the many safety pin accents that are de rigeur again for Versace (the brand first introduced the safety pin dress in the spring/summer 1994 collection and brought the look back for its pre-fall 2019 collection), there were also numerous new scarf prints, done in a mixture of the brand’s La Greca logo and a neon floral motif that the brand called an “Acid Bouquet” (a punchy alternative to the usual spring florals).

“The foulard has been with us since the very beginning of the brand, but this season turns everything on its head, it is no longer fluid or dreamy, the scarf is provocative, sexy, wound tight,” Versace wrote in the show’s presentation notes.

Scarves were worn every which way, from bias cut silk dresses and traditional head wraps to the 2000s throwback scarf top. Emily Ratajkowski modeled the look in a long sleeve cropped scarf print top cinched with gold hardware buttons (which matched the ’90s-era gold button earrings she wore) with a coordinating head wrap and a super-low-cut black skirt, which was held together with aforementioned safety pins. Elsewhere, the safety pin skirt was replaced with super-low-rise black flared trousers that appeared to have some stretch to them — a garment what was a definitive piece in the original Y2K wardrobe.

On foot, Versace continued with its platform movement, adding height to three-strap satin sandals with square toes for a look that read as couture-level Delia’s nostalgia (a sure way to attract wistful Millennials). The platforms also came in loafers (a continuation from the fall ’21 ) and a slide style with Versace’s Medusa head attached in gold, while other strappy sandals included gold chain link detailing (there were also quite a few chain link anklets.

Versace also captured another key trend from Milan:  the return of the miniskirt. The garment was true to Versace form: super short, super sexy and with the clear intention to turn heads.