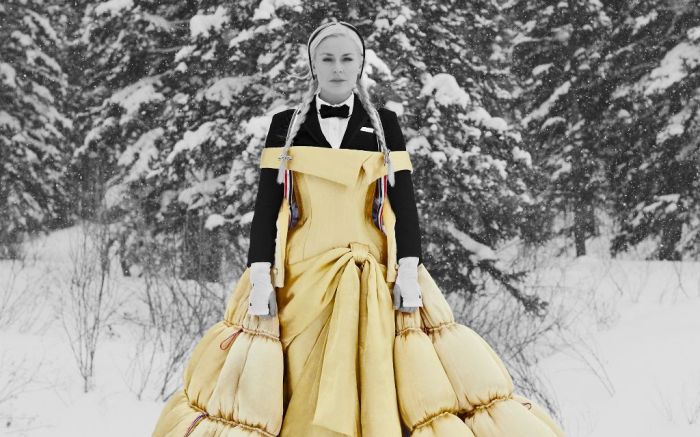 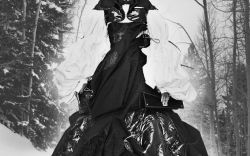 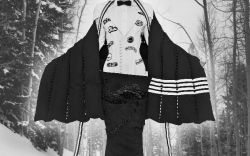 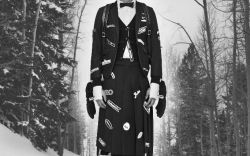 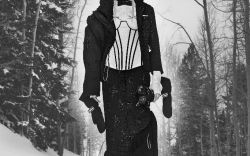 After weeks upon weeks of virtual fashion shows making up the hodgepodge of this season’s fashion month, it’s not so easy for a brand to stand out. But leave it to Thom Browne to choose a completely unexpected guest star for his fall ’21 collection fashion film.

The American designer tapped none other than Olympic skier Lindsey Vonn as the star for his virtual show, which he debuted on Sunday in a retro 1940s film noir.

Shot to resemble a classic short movie, the film opens with an Alpine landscape and the words “The most angelical and fantastical dream that led me home…” It shows Vonn asleep in a spartan bed and room, with just a wool blanket (cleverly accented with Browne’s signature stripes) and a head-to-toe black pajama jumpsuit covering her. The dream unravels to show her walking in a snow-covered, winter wonderland, holding hands with stick figures as she promenades in what is revealed to be a classic black tuxedo on top and a duvet-accented gold puffer gown on the bottom. Behind the scenes images reveal that underneath, she’s wearing a pair of matching gold leather booties — also done in a puffer style.

“I so love it here… with you, my friends,” reads the subtitles and it becomes clear that this is a silent film. It also becomes clear that Vonn is playing Dorothy in this dream sequence (complete with the braids). Her gold puffer gown the only spot of color in a black-and-white world, and after she says goodbye to her stick-figure friends, she closes her eyes and taps her gold boots together before jumping into a Browne-striped helicopter.

The helicopter drops Vonn on top of a mountain peak, and she steps out with her ski boots on, puffer gown removed. Models in a variety of elaborate black gowns, circular veils on their faces, dot the snowy landscape (which was shot at the Olympic Park in Park City, Utah). Vonn drops down onto a run with her skis, goggles and tuxedo jacket, where she meets more tuxedo-and-gown-clad models, both men and women. The whole scene unravels in slow motion, the better to catch glimpses of the fashion details, which included silk pleating, corsetry, cream cable knitwear, elaborate beading, souvenir patches of both ski resorts and past Olympic Games, technical mittens (and beaded mittens and patches) — and even a few high-heeled boots on the actual ski slopes.

While most agree that nothing beats an in-person fashion show, Browne’s fashion film was one of the few that was actually able to better show the details of his clothes better on camera, zooming in on aforementioned details to elaborate degree.

The film concludes with a big shoe moment: Vonn is back in her bed, surrounded by the stick figure people. “I had the most interesting dream… and you were all there.” She is wearing only the gold boots as a reminder of her Alpine fashion fantasy.