Stella McCartney has long taken the lead in making the fashion industry a more sustainable one, especially on a global luxury level.

For her pre-fall ’21 collection, which debuted today, the designer took yet another strong — but clever — approach to her message. And this time, it comes with a petition.

Working with photographers Mert and Marcus as well British comedian David Walliams for narration, McCartney showcased her collection through photo and film with a series of models wearing cartoonish animal heads. While the look, which the designer first debuted on the runway at Paris Fashion Week in February 2020, seems playful on the surface, the designer’s intent is to show the fantasy of animals living freely and taking their place amongst humans.

The statement also comes in support of the Human Society International’s petitions to end fur use globally, and with the collection debut the designer is asking an international community of change makers (names to be revealed in coming weeks) to sign HSI’s Stop Deadly Fur petition for North America, Europe and Asia, calling on all countries to ban fur farming and take note of the trade’s danger to both human and animal lives during the COVID-19 pandemic.

“While this campaign is light-hearted, I wanted to address a serious issue: ending the use of fur,” said McCartney upon the collection’s release. “Whether it is being sold here in the United Kingdom or farmed globally, barbarism knows no borders and this effort is key to my life’s mission of bringing a conscience to the fashion industry. I am proud to partner with Humane Society International and to help raise awareness of the incredible work they do.”

The collection is McCartney’s most eco-forward line to date and is chock full of sustainable details, using materials such as recycled polyester, sustainable viscose and Econyl, a recycled nylon that the designer has pioneered in incorporating into her garments. McCartney also added two new pre-fall ’21 footwear styles to her offering of sustainable-but-still-luxe footwear: the Ivy boot, an over-the-knee style made with the line’s signature vegan-friendly mix of polyurethane and polyester, with a lining that is 35% bio-based mass content; and the Emilie, a chunky boot with a lug sole similar to offerings of recent seasons. The style’s upper is made from a water-based polyurethane, while its cut insock is made of 35% bio-based content and uses sustainably-sourced wood. 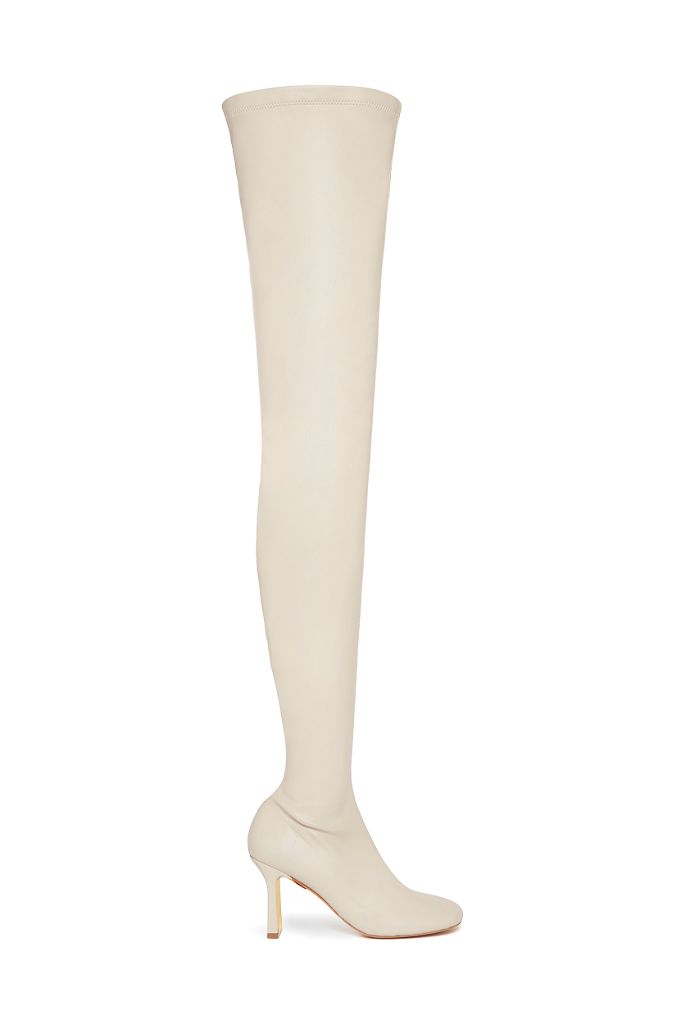 The collection debut also comes after a high-profile weekend for the British designer, who attended the G7 Summit as a guest of the Prince of Wales. McCartney attended the event in Cornwall, England and also spoke at a pre-summit event at St. James Palace on Thursday, where she implored leaders such as U.S. Special Presidential Envoy for Climate John Kerry to prioritize climate change legislation and initiatives.

“The fashion industry is one of the most harmful industries on the planet, sadly, to the environment. So I’m here to represent a more sustainable business model in that sense. We are a sustainable fashion house at Stella McCartney. We’ve been practicing this for 20 years now,” McCartney said during her presentation. “I’m really here to ask all of these powerful people in the room to make a shift from convention to a new way of sourcing and new suppliers into the fashion industry. I think one of the biggest problems that we have in the fashion industry is we’re not policed in any way. So we have no laws or legislations that will put hard stops on our industry to have a better sort of focus for the future of the planet… I think we need to be incentivized, we need to have taxation’s looked at to work in a better way.”