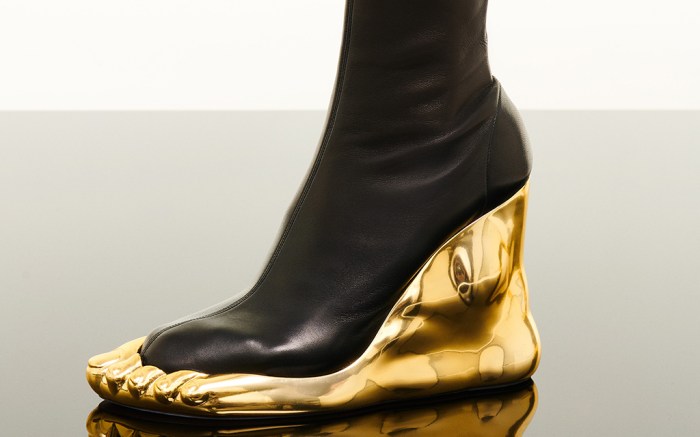 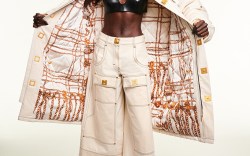 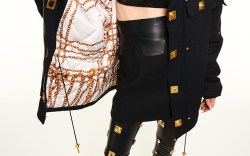 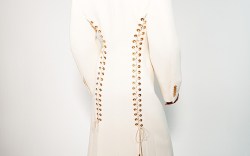 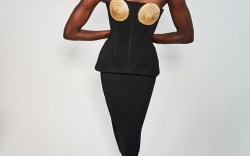 The imaginative world of Elsa Schiaparelli continues to make a buzz, even a century later.

Under Daniel Roseberry’s creative direction, the fashion house is having a moment and making headlines for its bold accessory-adorned pieces. On Sunday, Emma Corrin accepted her virtual honor for Best Actress in a Drama Series at the Critics’ Choice Awards in a sculptural and surreal jewel-encrusted dress, one of the best dressed of the evening. Lady Gaga also chose the brand for her Inauguration Day performance, donning a haute couture gown with a navy bodice and dramatic full red skirt and train, plus an enormous brass bird brooch that became a definitive fashion meme of the day.

For the fall ’21 collection, Roseberry (who has been the creative director of the brand since 2019), looked to redefine the concept of power dressing with a series of designs that included his signature bold accessories — this time, from head to toe, and with some of Gaga’s favorite accessories and shoes.

The collection’s footwear gave a whole new meaning to the statement shoe, with several showcasing a shiny molding of a foot cast in gold.

Accessories have always set the French fashion house apart from the others, and Roseberry continues with its legacy in the avant-garde with bolder-than-ever footwear pieces, anatomically-shaped purses and jewelry for the coming fall season.

Schiaparelli’s continuous influence of surrealism lies at the core of the brand as the founder befriended and collaborated with artists such as Salvador Dalí and Jean Cocteau on jewels and accessories back in the 1930s and 1940s. Notably, several of the Italian designer’s original surrealist pieces resurfaced for the label’s fall ’20 show at Paris Couture Week.

In addition to Schiaparelli’s bold toe shoes, the label also wants us to wear pointed-toe boots for fall. The trend has been pushed aside in recent seasons thanks to the controversial square-toe trend that’s dominated the market over the past two years.

In true Schiaparelli spirit, Roseberry decked out the pointed-toe boots with loads of surrealist charms — including eyes, noses, locks and keyholes — proving that there’s nothing chicer than a bold, statement shoe.