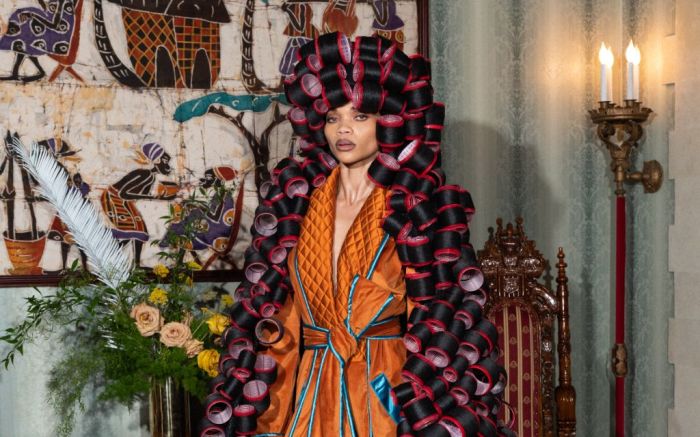 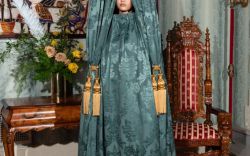 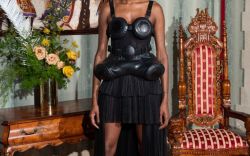 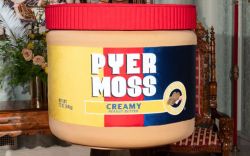 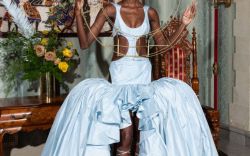 “If you’ve been to a Pyer Moss show, you know that it always rains,” shouted a PA as guests huddled under a tent to escape a torrent of rain that had unleashed on the dot at 2 pm on Thursday, the scheduled show time for founder and creative director Kerby Jean-Raymond’s history-making couture debut.

Over the next few hours that day, there would be a few false starts, as show runners scrambled to mop up the pools of water that drenched the raised runway on the front lawn of the Villa Lewaro, the Westchester, New York former estate of Madam C.J. Walker, the early 20th-century activist, philanthropist and entrepreneur whose beauty empire made her the first woman millionaire and first Black woman millionaire in America.

By now, tales of the rain-soaked day have traveled across social media: umbrellas trying to fend off a monsoon that was also pummeling New York City to the south; elaborate outfits (and plenty of Pyer Moss x Reebok Sculpt sneakers) ruined by rain and mud; footage of a boozy dance party under the tents as thunder rolled; Jean-Raymond passing out marijuana blunts tucked inside glass vials that read: “Waiting on reparations, and a f**king apology, ’til then, we’re getting into the weed business.”

If anything, the delay only created more buzz. At the rescheduled show on Saturday, long lines wrapped around the entrance to Villa Lewaro (Jean-Raymond had announced that he was opening up the event to the public with limited tickets via an online raffle of sorts) and local residents stood outside the gates to look on.

Everyone who came back knew that it would be worth the wait — and so must have the Fédération de la Haute Couture et de la Mode (FHCM), who invited Jean-Raymond to join its elite group of couturiers as its first Black fashion designer. The organization extended its haute couture fall/winter 2021-2022 season to officially accommodate the rescheduled show, which was already a rarity in the rarified world of haute couture, which usually shows only in Paris.

When the show finally began, at a quarter to 4 pm, the sky was blue and the sun was hot. The band started first, an eight-piece string group with six drummers and eight vocalists. Then out came former Black Panther chairwoman Elaine Brown, who walked out onto to the runway to give round two of a speech on Black community and organizing (the 78-year-old writer and activist did it the first time on Thursday during one of the false starts that day). Then came the dancers, who circled music artist 22Gz for a performance that ran throughout the show in the center of the continuous runway.

Then, one by one, the models emerged. Each look had an everyday object attached to it:  First, there was a human bottle cap, a model with a disc-shaped skirt, red leather boots and a bucket hat to resemble the wavy lines of the metal top. Then, a curtain. A chair. A traffic light. A fire escape. A mop. A boar-bristle brush. A lamp shade. A typewriter. What did they all have to do with Pyer Moss and couture? It was clear from the audience that most weren’t in on the connection. It wasn’t until the final look — a model in a powder blue minidress with neon pumps, carrying a refrigerator that read “But Who Invented Black Trauma?” in fridge magnets that a clue was offered.

Jean-Raymond and his design team already had a collection laid out, but after finding the list — and venturing to Joshua Tree for a group Ayahuasca trip — the designer decided to rework the collection; the final result is its fourth iteration.

To adhere to the FHCM’s craftsmanship guidelines, Jean-Raymond opened studios in L.A., working with costume designers and fabricators to create both the garments and their accompanying sculptural pieces, many of which required welding and fiberglass creation. The bottle cap look took two months to create, while a floor-length wig made of hair curlers took four months to hand roll.

“Every time we made something, we sat back and stared at it and we thought how can we make it better?” said Jean-Raymond. “Every time, the construction got more complicated. It’s been a long process.”

The intense production and manufacturing also included footwear, and with the couture collection came an expansion for Pyer Moss, taking the category in house (previous collections were done in collaboration with designer Aurora James and Brother Vellies). Jean-Raymond tapped designer Tovah Robinson (a Camuto Group alum, who helmed design for the company’s BCBGMAXAZRIA and Imagine Vince Camuto lines) and the production firm Search N Design to create a collection of high heels and boots that combine the off-the-moment fluted heel shape reinvigorated by designer Amina Muaddi with Jean-Raymond’s wrapped rubber aesthetic found in his Reebok designs.

“I have a designer who is literally my soul mate, I wish we had found each other ten years ago,” said Jean-Raymond of Robinson. “I’ve been finding people who speak my language to create more and more.”

And there will certainly be more from Jean-Raymond. The designer’s role as global creative director of Reebok will start to take more shape later this week and through 2022, when he will unveil full collections for the brand.

The designer is also still currently scheduled to appear during New York Fashion Week come September, and later in the fall, the couture collection will go on display at Villa Lewaro (art gallerist Nicola Vassell will be representing the collection — a confirmation of its statement as fashion-as-art). A documentary of the couture process is also in the works, and other film projects from the designer are rumored. And those blunts weren’t a gimmick:  Jean-Raymond is venturing into cannabis, working with Viola, one of the largest Black cannabis growers in the U.S., to create a new collection of products that will benefit communities harmed by marijuana drug enforcement.