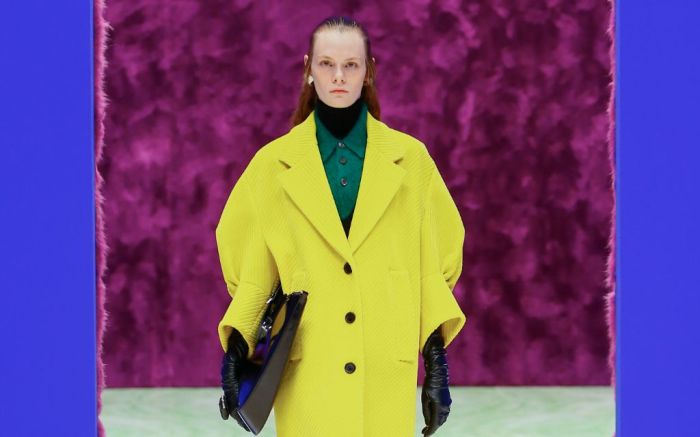 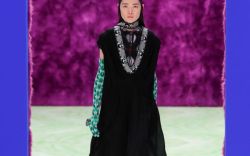 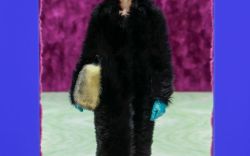 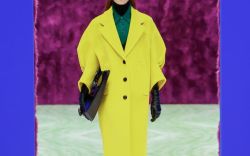 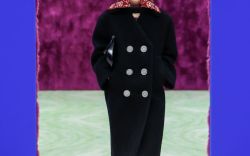 For their fall ’21 women’s ready-to-wear show during Milan Fashion Week, Miuccia Prada and Raf Simons used the same set that appeared in their men’s fall ’21 show from January. Fuzzy walls, even fuzzier faux-fur floors, sharp lines and a maze-like set of square-box rooms gave the show a calming ASMR effect.

But it wasn’t just the setting that mirrored the last show. The women’s collection (the second from the joint creative venture of Prada and Simons) replicated many of the menswear looks that were shown last month, a repetition that not only provided cohesion for Prada’s fall season but also proved that fashion is inching ever closer to a holistically gender-neutral way of style.

The men’s and women’s counterparts could be seen from head to toe, from suiting to outerwear, knitwear to boots. But they were not exact replicas: each women’s piece had its own tailoring, its own way of fitting the body. The sleek black suits that scrunched up high on the arm past the elbow were fitted more in the waist, but still slim like the men’s version. There were oversized coats in bright colors, particularly a yellow style that appeared nearly identical to a men’s topcoat, except that the sleeves were puffed, cinched and cut higher up on the wrist (both versions had sleek leather gloves to accentuate).

The women’s footwear wasn’t exactly a mirror image to the men’s styles — boots featured more colors and prints than the glossy black leather men’s brogues. But both collections featured a similar platform sole: chunky, with a flatform pitch but a cutout in the arch to give a cartoonish shape to the shoe bottoms. Some women’s styles looked like they were attached to matching printed leggings.

The dualities and similarities in the men’s and women’s looks were, of course, intentional:  In the show notes, Prada and Simons explained that the collection rooted in the ideas of change and transformation, “a fusion between disparate themes and intents mirrors the nature of humanity: a belief in the fact that men and women each hold the masculine and feminine within themselves.”

If that means men, women and gender non-conforming will all be heels come fall, we’re here for it.