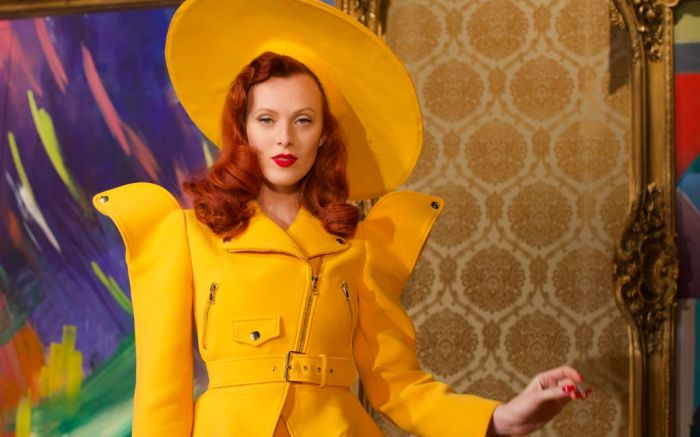 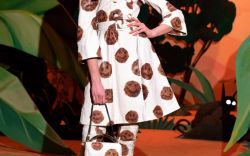 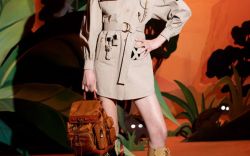 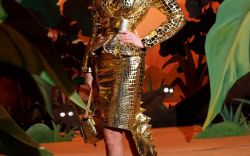 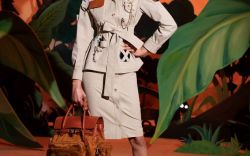 Jeremy Scott knows how to throw a party. Each Milan Fashion Week, the Moschino creative director can be counted on to deliver one of the wackiest, liveliest and most memorable runway shows of the season.

Even during the pandemic, the designer has found ways to keep entertaining his fans, such as when he staged a marionette show for the brand’s spring ’21 collection, complete with puppets of famous show attendees like Anna Wintour, Edward Enninful and Anna Dello Russo as well as a few doll versions of Gigi Hadid.

Titled “Jungle Red” (a reference to the original film; it’s the name of a scandalous nail color that characters seek in a glamorous Manhattan salon), the fashion film is a romp through old Hollywood glamour stereotypes and plot lines. The scene opens with the ladies in a chic salon, sipping tea. Hill, Von Teese and Harlow are wearing retro skirt suits that upon closer examination are accented with clever accents, such as vintage coin purses for front pockets or oversized pearls meant to mimic an actual strand of pearls.

Then, Musk gathers the group of ladies to a small stage to announce an “adventurous little voyage to fashion land.” The curtain opens to reveal an elaborate cardboard cityscape set of New York City, where Bieber steps out wearing a menswear look of pinstriped suit-and-tie getup with shorts, black-and-white brogue platforms, paired with a comically miniature top hat.

After a few more skirt suiting looks, the stage rotates to a countryside set, where Miranda Kerr walks out in a milk maid-esque vintage dress, done in a matching countryside landscape of blue skies, rolling hills and cows — complete with a red barn handbag.

The pinnacle of the show comes when Musk introduces the trio of Murphy, Elson and Liberty Ross, wearing skirt suits, matching large-brimmed hats and platform sandals.

After that, the collection goes to a series old Hollywood, with a series of retro gowns. Maxwell walks out in a Marilyn Monroe-esque pink satin gown (a nod to “Diamonds Are a Girl’s Best Friend”) with a matching pink silk baseball cape, thigh-high boots with a coin purse silhouette and a handbag in the shape of a heeled boot.

The video ends with Von Teese sauntering across the room in a heart motif gown with matching heart-shaped headpiece. She turns to reveal a heart-shaped cutout on her derriére.