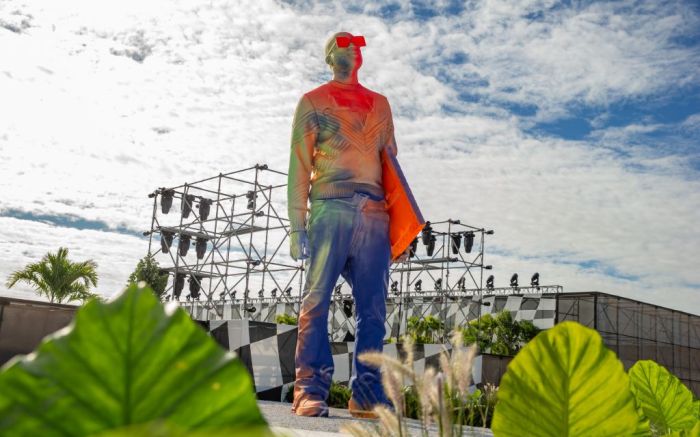 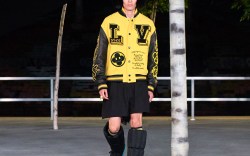 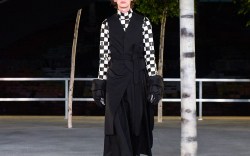 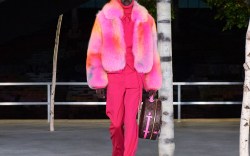 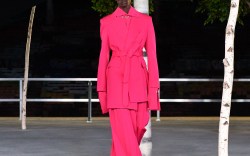 Virgil wouldn’t have wanted it any other way.

With only days separating the announcement of Virgil Abloh’s death and the unveiling of Louis Vuitton’s spring ’22 menswear collection in Miami — the designer’s next to last collection for the French brand — fans and friends were likely experiencing whiplash from the week’s events.

But just as it did so many times during the designer’s fast-paced, prolific career that spanned just over a decade in fashion, the show went on.

Timed to the kick-off of Art Basel (where the designer had often showed other projects), the show took place on a wharf off the mainland of Miami, where attendees were shuttled to on ferries (celebrity attendees sped over on speedboats monogrammed with the LV symbol and “7.2” to indicate Abloh’s seventh show for the brand). Outside the entrance stood a gigantic statue of Abloh done in spray-painted neon ombré (sunglasses on, LV monogram portfolio in hand). It served as a reminder that the entire experience, from the cement-runway venue down to the monogram hip bags and sneakers, all the way over to the brand’s new Miami menswear boutique and larger-than-life sculpture garden, were born from Abloh’s own fountain of creativity.

As he had done in his very first runway show for Louis Vuitton in 2018, Abloh had prepared a show that included friends both in the front row (Kanye West, Don C, Jerry Lorenzo and Pharrell to name just a few) and walking the runway. One of the collection’s most representative looks was worn by longtime friend Kid Cudi, who wore a fuzzy color blocked zip-up jacket in powder blue and bright green, with a matching head of hair plus skirt and trousers that signaled Abloh’s blossoming exploration into the space between masculine and genderless dress codes.

Just as he had done with that first show for spring ’19 (titled “Color Theory,” as much a reference to human diversity as it was to its rainbow palette), spring ’22 was filled with electric hues, from ombré jackets, graphic label collages stamped on leather pieces, breezy, color-flecked knitwear, flashy track suits, tie-dye separates and bold-but-sophisticated traditional suiting all the way to rainbow trapper hats, neon tipped lace-up dress shoes and of course, an array of sneakers. The last of which included a series of monochromatic and LV monogrammed Air Jordan 1s but also the brand’s own chunky trainers.

Sneakers weren’t the only styles on the floor, though. Abloh had also put forth a series of hybrid boots. Some had Western-style uppers (such as those worn on hip-hop artist Offset, who also walked the runway), while others had cold-weather silhouettes and materials, reminiscent of snowboard boots (not the first time that Abloh, an avid skateboarder and snowboarder, had dabbled in the category).

After a statement making fall ’21 collection, spring ’22 proved to be one of Abloh’s most compelling and comprehensive collections for Louis Vuitton — a source of creativity and inspiration c