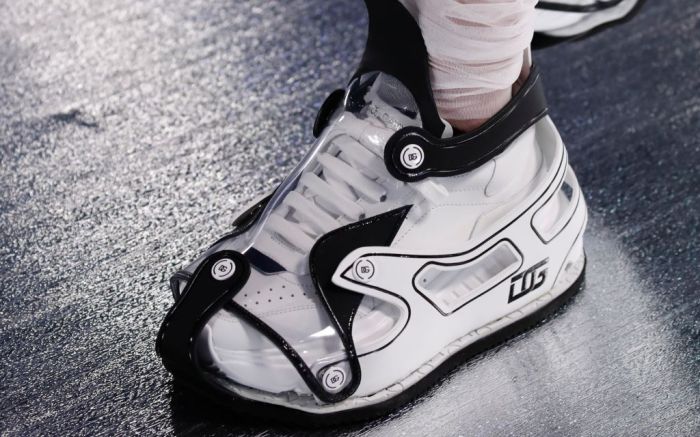 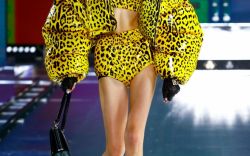 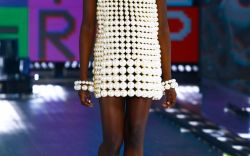 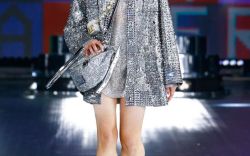 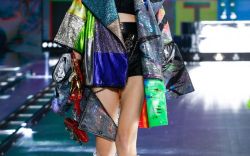 Despite another season mired by the pandemic, Milan Fashion Week continued its tradition of showcasing some of the boldest shoes on the runway and in presentations for the fall ’21 season.

Even as most shows were broadcast to editors, buyers and spectators virtually, Milan’s fashion-forward fantasies continued to push the envelope, even if it was mostly by way of computer, laptop and smartphone screens. What was evident though, is that both the ready-to-wear and footwear for the season ahead caught the fashion world’s attention.

PVC-covered sneakers from Dolce & Gabanna and out-of-this-world futuristic silhouettes, such as bulbous platforms by Prada, were just some of the craziest shoes offered for fall. Others engaged the audience by tapping into the classics, such as Marni, which showcased Converse-inspired pointed-toe sneakers coordinated with patterned frocks for its virtual presentation.

There was no shortage of heels — though Italian fashion houses such as Fendi and Salvatore Ferragamo played with the classic silhouette — contorting its form into inverted and sculptural shapes. Milan Fashion Week continued to bring forth a collective sense of optimism for the season ahead, as did New York Fashion Week. A stark contrast to last fall’s shows, which coincided with the start of the global pandemic’s spread.

Below, take a look at the craziest shoes seen at Milan Fashion Week for the season ahead.

Several shows held during Milan Fashion Week tapped into the idea of the future. Domenico Dolce and Stefano Gabbana took the sentiment quite literally by working with the Istituto Italiano di Tecnologia (IIT) for their fall ’21 collection. The designers utilized multifunctional humanoid robots, to help bring their designs to life. The robots helped generate the 135 looks for the show, inspired by the bold style channeled by the supermodels of the ’90s. The collection didn’t skimp on footwear, either.

Bold shoes such as the Italian luxury brand’s PVC-covered sneakers caught the attention of viewers. The chic yet sensible-for-the-pandemic-era covering featured the fashion house’s signature logo throughout the upper, including in the form of snaps. Dolce & Gabbana’s snow boots from the show were also noteworthy. Several bold colorways were introduced for fall ’21, including holographic chrome, yellow leopard and rhinestone-embellished, all in the form of a puffy, insulated boot.

Jeremy Scott’s star-studded show for Moschino was full of its usual glam and camp. For fall ’21, the designer found inspiration through the 1939 cult-favorite film “The Women.” Shoes came in the form of chunky platforms and bold thigh-high boots in an array of colors.

But what stood out in the fall ’21 showcase was a shoe that came in the form of another beloved accessory: a purse. Everything is not what it seems in the year 2021, and Moschino’s heeled bootie bag is the perfect anecdote to the bizarre times we live in.

Francesco Risso brought Marni’s colorful knits into fall ’21 with a little help from one of the most classic American sneaker silhouettes. Though it wasn’t an official collaboration with Converse, the Italian luxury label’s pointed-toe sneaker’s resemblance was uncanny.

This wasn’t the first time Marni tapped inspiration from the Nike-owned sneaker brand, but its use was especially prevalent this year as the shoe is one of Vice President Kamala Harris’ favorite footwear options. Available in the form of both a flat style and a high heel bootie, Marni’s sneakers were among the most buzzy-worthy and over-the-top shoes on display during Milan Fashion Week.

Raf Simons and Miuccia Prada took platforms to the next level for fall ’21. Offered in both a leg-climbing version and another in bootie form, the retro style was a futuristic rendition of the classic elevated shoe.

The rounded toe and chunky heel give the style a reinvigorating update that will no doubt be an instantly recognizable silhouette come fall.

Giuseppe Zanotti used the 21st century’s idyllic version of the Roaring ’20s — which we still have yet to experience — as design inspiration for his latest collection, presented by appointment only during Milan Fashion Week. One of the most notable and craziest silhouettes was a sapphire-colored wedge heel that had a contorted upper.

The futuristic wedge evokes a vision of post-COVID life, involving people dressing up again, wearing heels and being able to go out freely in the world. “In history, darker times have always been followed by a renaissance in terms of creativity. I look forward to this century’s roaring twenties,” said Zanotti.

Last, but certainly not least, Paul Andrew’s latest for Salvatore Ferragamo tapped two distinct, but equally bold styles for the fall season. The Italian fashion house’s chrome sculptural kitten heels were among one of the head-turning shoes featured during the show.

In addition to the ultra-shiny heels were the brand’s unisex biker boots. The utilitarian footwear option was another futuristic shoe that evoked fashion’s declaration of embracing what’s ahead.

Want more? Click through our gallery of The Craziest Shoes From Milan Fashion Week Fall 2021.