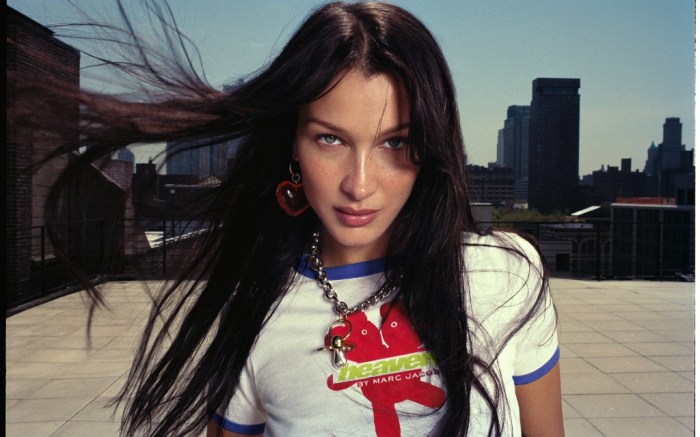 Bella Hadid stars as the face of Marc Jacobs’ “Heaven” campaign for fall ’21.

The campaign places the 25-year-old supermodel in various looks from the brand, all consisting of bold, retro-inspired garb complete with chunky boots and shoes.

In one shot, Hadid strikes a pose a sultry bra top paired with a skirt that pays homage to Sofia Coppola’s 1999 film “The Virgin Suicides.” The silky piece features the face of Kirsten Dunst’s character Lux Lisbon. Another snap sees the model sporting a red plaid schoolgirl-inspired skirt and a printed top under a sweater vest emblazoned with the face of E.T. from the iconic 1982 sci-fi film.

Hadid can also be seen modeling some funky denim and chunky lug-soled mary jane-style shoes while posted up in a phone booth. In another shot, she rocks the same shoes with a pair of bright blue knee-high socks and a short black dress.

The model is also the new star, alongside Cindy Bruna, of the new Michael Kors 007 capsule collection. In the campaign video, she takes on the role of a Bond girl.

Click through the gallery for more of Bella Hadid’s street style evolution over the years.