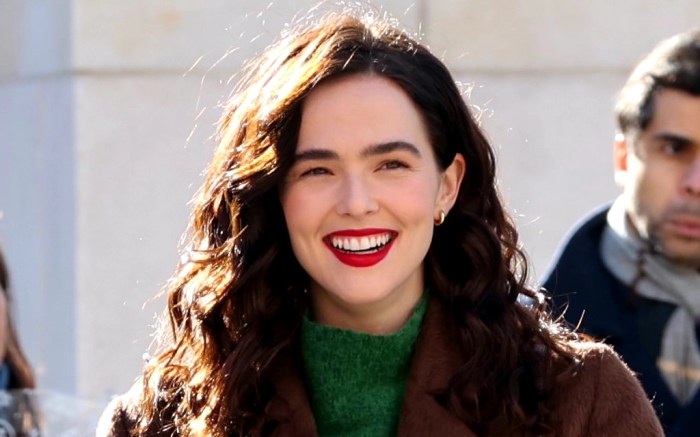 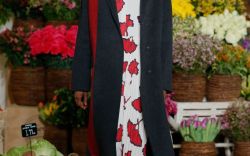 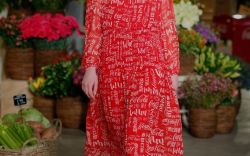 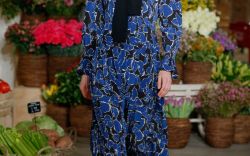 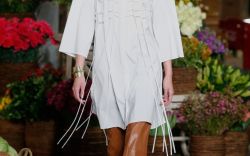 The “Hound” actress shot for her new film “Something From Tiffany’s” in Washington Square Park, wearing an ensemble that was eclectic and contemporary. For the occasion, Deutch donned a brown overcoat, layered atop gray wool pants and a chunky green sweater. The outfit’s pieces featured heavy textures that are ideal for winter weather, while being able to pair with numerous other pieces in one’s wardrobe. Deutch’s accessories were equally simple, including delicate gold earrings and a brown leather crossbody bag.

For footwear, the “Set It Up” star wore a pair of Acne Studios boots. The Bertine style featured smooth sock-style leather uppers with slightly squared toes. The pair also included step-back-style block heels that slightly extended from their soles, adding a faint quirkinesses to Deutch’s outfit. The versatile style proved that ankle boots are a reliable go-to, and can ground any outfit—particularly ones that are equally as versatile. Deutch’s boots retail for $590 on Nordstrom.com.

Ankle boots are a versatile shoe that can be worn year-round, particularly in the wintertime as an alternative to pumps. The style adds fuller coverage while featuring a range of heel sizes and shapes in pointed, round or square-toe silhouettes. Leather and suede pairs in neutral colors like Deutch’s are a top trend, and stars like Selena Gomez, Kristen Stewart and Kamala Harris have also worn pairs by Tod’s, Chanel and Prada in recent weeks.

When it comes to shoes, Deutch often wears sleek heels on the red carpet. The “Not Okay” actress can regularly be seen in pointed-toe pumps by Roger Vivier, as well as platform sandals by Giuseppe Zanotti, Stuart Weitzman and Christian Louboutin. When off-duty, she wears Veja, Nike and Converse sneakers, as well as sandals by Prada and Birkenstock. Deutch is also a fashion world fixture, appearing in Fendi’s debut Peekaboo handbag campaign and front rows for brands like Tory Burch, Dolce & Gabbana, Versace and more during Fashion Month.

Click through the gallery to see more of the season’s top boots from New York Fashion Week.