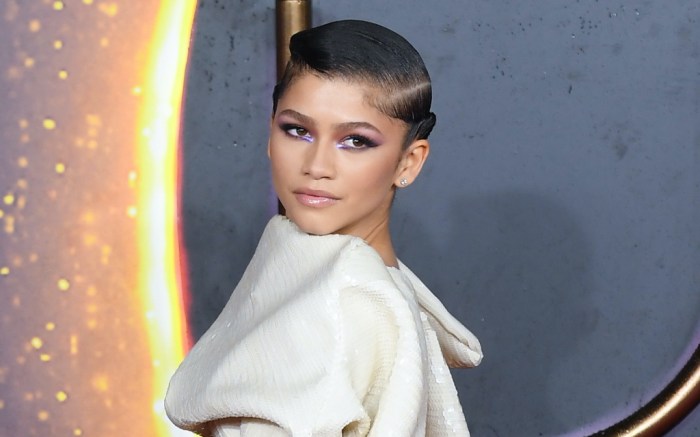 Zendaya hit the red carpet looking like she stepped off a spaceship — with a full glam team.

The actress appeared at the UK premiere of “Dune,” her new sci-fi movie co-starring Timothée Chalamet. Styled by Law Roach, she wore an asymmetrical Rick Owens white column gown that gave serious space princess vibes. The look featured one sleeve and sequins throughout the entire dress. Her jewelry, courtesy of Bulgari, included a silver bracelet that crawled up her right arm, simple earrings and multiple rings. Her purple galactic eye makeup tied the whole look together.

The highly-anticipated film has been promoted for well over a year now. Originally set to premiere in November 2020, the pandemic pushed this back to Oct. 22 of this year. The film serves as the first of a two-part adaptation of the 1965 novel of the same name. The film’s UK premiere also included Zendaya’s other costars like Rebecca Ferguson and Jason Momoa. Roach even joined the fun on the red carpet ahead of the showing.

When it comes to the Emmy-winning actress’ footwear, Zendaya has been spotted in everything from strappy sandals to over-the-knee boots to pumps from high-end brands like Jimmy Choo, Roger Vivier, Casadei and others. In addition to wearing stylish outfits on the red carpet, she frequently collaborates with fashion brands including Tommy Hilfiger. She also serves as a brand ambassador for Valentino, Bulgari, Lancôme and Covergirl Cosmetics. Zendaya has also ventured into design, launching her affordable Daya by Zendaya shoe collection in 2016. She is known to be a front-row fixture during Fashion Month as well, attending runway shows for Vera Wang, Louis Vuitton, Michael Kors, Rebecca Minkoff and others.