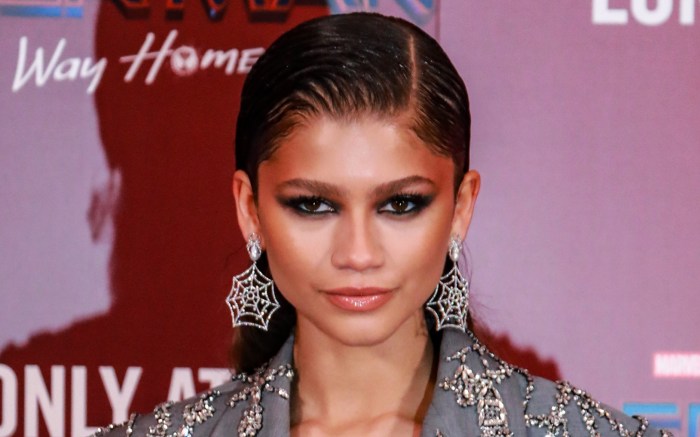 Zendaya brought new meaning to head-to-toe glam at the “Spider-Man: No Way Home” premiere in London.

While hitting the red carpet with boyfriend Tom Holland (who plays Spider-Man in the film), the “Euphoria” star wore a bold statement blazer from Alexander McQueen’s Spring 2022 collection. The oversized gray style featured wide shoulders and large lapels, accented with black double-breasted buttons. The style was especially romantic from its dazzling crystal accents and embroidery, which encircled the blazers’ shoulders and left side with swinging pendants and sparkling strings as if layered in jewelry. Her stylist — and FNAA Style Influencer of the Year — Law Roach cleverly paired the piece with diamond and pearl Jacob & Co. drop earrings shaped like spiderwebs.

For footwear, the Emmy Award-winning actress wore a pair of Alexander McQueen boots, also from the brand’s Spring 2022 collection. The black thigh-high style featured sheer stocking-like uppers, leather capped toes and a cool asymmetrical heel. Similar to the blazer from the collection, the shoes are detailed with all-over crystal accents laid in arc shapes to mimic chandeliers. The pair created a head-to-toe sparkling statement while proving that jewelry can even be part of your shoes.

Thigh-high boots — or those with taller silhouettes — have been on the rise this year. Thigh-high, over-the-knee or even legging-boot hybrid styles have grown in popularity due to their fuller coverage and ability to streamline nearly any look. Aside from Zendaya, towering pairs have also been spotted on Kim Kardashian, Cardi B and Hailee Steinfeld from brands like Richard Quinn and Balenciaga in recent weeks.

When it comes to shoes, the former “Shake It Up” actress has been spotted in strappy sandals, boots and pointed-toe pumps from Jimmy Choo, Roger Vivier and Casadei. Most frequently, she wears pointed-toe Christian Louboutin pumps on the red carpet. She also serves as a frequent collaborator with fashion brands including Tommy Hilfiger and as a brand ambassador for Valentino, Bulgari, Lancôme and Covergirl Cosmetics. The actress has even ventured into design, launching her affordable Daya by Zendaya shoe collection in 2016. Zendaya has become a front-row fixture during Fashion Month as well, attending runway shows for Michael Kors, Vera Wang, Louis Vuitton, Rebecca Minkoff and others.

Click through the gallery to see Zendaya’s red carpet evolution over the years.