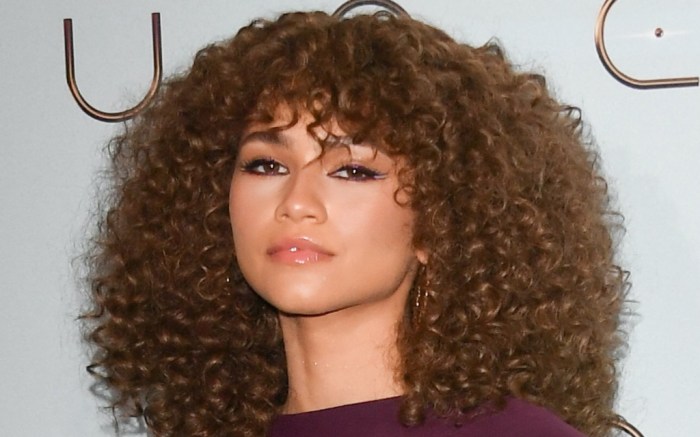 Zendaya went viral on the red carpet for the Parisian premiere of her new film, “Dune.”

The Emmy-winning actress stunned in a deep purple dress from Alaïa’s spring 2022 collection, the first line for the house by designer Pieter Mulier. Her outfit featured an extra-cropped top with long sleeves, as well as an angular bodice hem. Its slim-fitting skirt ended in a train of dark maroon and black feathers. Both pieces in the set included perforated details, reminiscent of Alaïa’s signature geometric lace. Styled by Law Roach, her outfit was complete with a gold ring and gold hoop earrings.

The dynamic look, though covered by the star’s full skirt, also included Jimmy Choo shoes. The ensemble is the latest matching set to hit the red carpet this week; afterwards, as revealed on Instagram, Zendaya also wore a two-piece dress with crystal detailing by David Koma. Earlier in the weekend, Anya Taylor-Joy similarly wore a matching outfit — a flowing floral Rodarte dress and light jacket — at the Venice Film Festival.

The “Dune” press tour that began last week has already resulted in a range of bold outfits from Zendaya and Roach — as one would expect. Since the film’s debut in Venice, Zendaya has been seen on and off the red carpet in statement-making ensembles by Valentino Haute Couture, Balmain and Dion Lee. Each look was paired with a neutral pair of pointed-toe pumps by Christian Louboutin.

Matching sets have become 2021’s greatest styling hack. The styling trick, which pairs clothing, shoes, and accessories in the same color or print, creates an instantly streamlined outfit. The trend has been a verifiable hit with A-listers, seen on the likes of Kim Kardashian, Eva Longoria and Hailey Baldwin.

Coordinating shoes are one of Zendaya’s signatures crafted by Roach over the last several years. Many of her past outfits by Armani, Carolina Herrera, Tom Ford and more top labels have matched her footwear. These styles often include strappy sandals, over-the-knee boots and pointed-toe pumps from high-end brands like Jimmy Choo, Roger Vivier, Casadei and more.

Zendaya’s role in the fashion world extends beyond just wearing luxury designers. The “Greatest Showman” actress previously collaborated with Tommy Hilfiger on a Tommy x Zendaya collection for the fall ’19 season, and released her affordable Daya by Zendaya shoe line in 2016. She’s currently a brand ambassador for Bulgari, Lancôme and Covergirl Cosmetics, as well as the star of Valentino’s fall ’21 campaign. Outside of design and modeling, Zendaya has also become a front-row fixture during Fashion Month, attending runway shows for brands like Michael Kors, Vera Wang, Louis Vuitton, Rebecca Minkoff and more.

Add a maroon set to your wardrobe, inspired by Zendaya.

Check out the gallery below for Zendaya’s red carpet style evolution over the years.