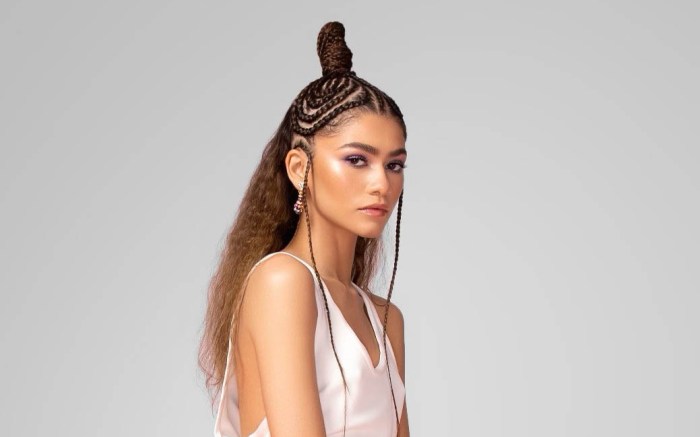 Zendaya has done it again.

The actress wowed at the Critics’ Choice Awards on Sunday night, wearing an unconventional look only she can pull off: a white tank top. The star, who was styled by Law Roach, paired the basic with a bold orange skirt from Maison Valentino. The high-waisted piece billowed out at the sides, creating a dainty ballerina effect. The skirt also featured large pleats. Zendaya finalized the look by styling her hair in a braided half-up half down look and opted for dangling earrings.

Tonight was a special one for Zendaya as she was honored with the SeeHer Award, which recognizes a woman who “embodies the values set forth by the SeeHer movement to push boundaries, defy stereotypes and acknowledge the importance of authentic portrayals of women across the entertainment landscape.”

The award was presented to her by her “Malcolm & Marie” co-star John David Washington. In her acceptance speech, Zendaya thanked Washington and shared: “Thank you to the Critics’ Choice Association for this incredible honor and See Her. This means so much to me, I thin, as I was thinking of things to say the only real thing I can think of is gratitude.”

Tonight was also big for for Roach as he also dressed Anya Taylor-Joy, who took home Best Actress in a Movie/Miniseries for her role in Netflix’s “The Queen’s Gambit.” For Sunday’s ceremony, Taylor-Joy wore a whimsical tulle gown from Dior that came in a deep purple hue. The dress featured a sheer top and flowing skirt. Taylor-Joy teamed the dress with coordinating gloves, giving the ensemble a regal touch. The actress finalized the look with plum lipstick and dangling earrings.

As for Zendaya, her Critics’ Choice look falls right in line with her eye-catching style. For every red carpet, Zendaya is sure to make a statement. Other labels she’s worn include: Christopher John Rogers, Tom Ford and Vera Wang and footwear from Christian Louboutin. The star has also worked with Tommy Hilfiger, codeveloping a collection with the brand in 2019.

The Critics’ Choice Awards aired live at 7 p.m. ET on the CW. The show can also be streamed live on Hulu, fuboTV and Sling TV. Taye Diggs is hosting this year’s ceremony, making it his third time in a row. The actor will be emceeing live from the stage of Barker Hangar in Santa Monica.

Click through the gallery to see more from the Critics’ Choice Awards 2021.