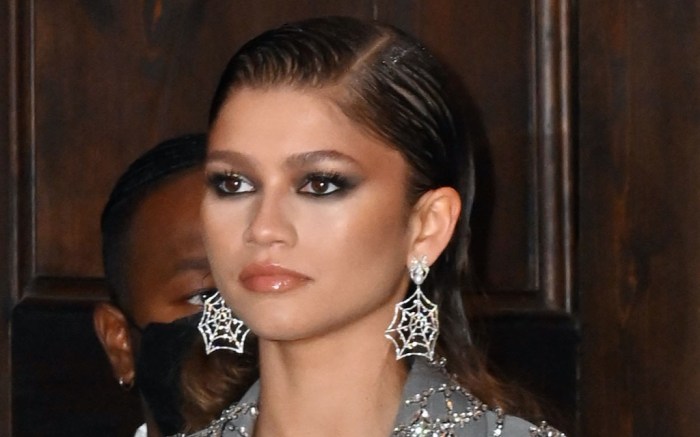 While posing for Richie Shazam behind a transparent sculpture, the “Euphoria” star wore a black bodysuit with long sleeves and legs. The one-piece outfit was layered beneath sparkly silver briefs by Schiaparelli. Also designed by Schiaparelli creative director Daniel Roseberry was a  bra that featured black and white leather twisted into cone-shaped cups, reminiscent of those famously worn by Madonna. Zendaya’s stylist — and FNAA Style Influencer of the Year — Law Roach also paired the dynamic top with futuristic white Coperni sunglasses.

For footwear, the Emmy Award-winning actress wore a pair of towering Pleaser Shoes sandals. The style featured black patent leather uppers, wide toe straps, thin ankle straps and thick platform soles. The pair’s most daring element, however, came from stiletto heels that appeared to total 6 inches in height. Zendaya’s shoes gave her look a sleek height boost, while elevating its sultry nature with a streamlined style when paired with her bodysuit.

Zendaya’s platforms are a sharp departure from her go-to pointed-toe pumps, though it’s likely the actress is revamping her look with new head-turning styles for the immediate future. Within her Interview editorial, Zendaya also donned metallic silver and white leather boots by Courreges. This week, she notably made a statement in embellished stocking boots by Alexander McQueen at the “Spider Man: No Way Home” premiere as well.

Platform sandals have become a popular shoe style this winter, due to their boost of height and support from platform soles and ankle straps. Aside from Zendaya, stars including Kate Beckinsale, Hilary Duff and Chrissy Teigen have also worn pairs from Stuart Weitzman, Jimmy Choo and Prada in recent weeks.

When it comes to shoes, the former “Shake It Up” actress has been spotted in strappy sandals, boots and pointed-toe pumps from Jimmy Choo, Roger Vivier and Casadei. Most frequently, she wears pointed-toe Christian Louboutin pumps on the red carpet. She also serves as a frequent collaborator with fashion brands including Tommy Hilfiger and as a brand ambassador for Valentino, Bulgari, Lancôme and Covergirl Cosmetics. The actress has even ventured into design, launching her affordable Daya by Zendaya shoe collection in 2016. Zendaya has become a front-row fixture during Fashion Month as well, attending runway shows for Michael Kors, Vera Wang, Louis Vuitton, Rebecca Minkoff and others.

Elevate your winter looks with sleek sandals, inspired by Zendaya.

Click through the gallery to see Zendaya’s red carpet evolution over the years.