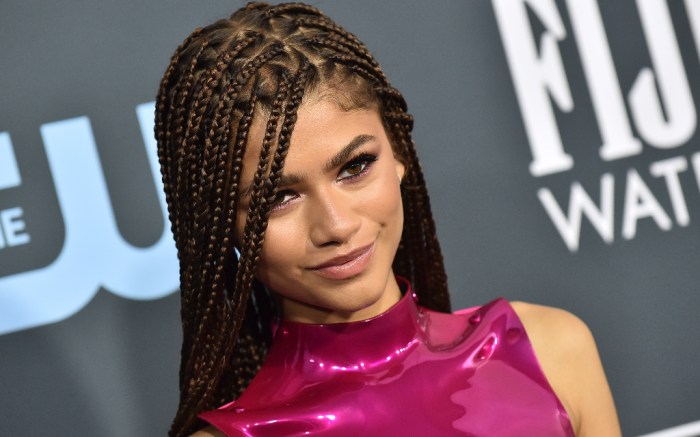 Another day, another slay from Zendaya.

On Saturday, Zendaya blessed the internet when she took to Instagram, sharing a photo of herself in a green monochrome look. The ensemble was festive ahead of Easter as it included a sparkly double breasted blazer from Pertegaz — which she wore over a coordinating emerald turtleneck.

Zendaya accessorized with jewels from Bulgari and wore shimmery pumps, giving the look a celebratory finish. The pumps featured a sequin construction and pointed toe. The shoes were finalized with a stiletto heel. Adding even more glamour, Zendaya’s hair was styled in loose curls and swept to the side.

Monochrome dressing has become a must-have styling hack of 2021. While the look is no new invention, the trend had its first major moment of the year at the presidential inauguration as Vice President Kamala Harris, First Lady Jill Biden and former First Lady Michelle Obama all sported looks of one hue. Soon after stars including, Kylie Jenner, Hailey Baldwin, Chloe Bailey and more have tried out the trend. What makes the style so popular is that it makes a look complete with little to no effort. It also makes the ensemble appear more dressed up.

Zendaya, however, has been gracing us with several fashion moments over the past few months. In March, the actress wowed at the Critics’ Choice Awards on Sunday, wearing a white tank top teamed with a bold orange skirt from Maison Valentino.

The high-waisted piece billowed out at the sides, creating a dainty ballerina effect. The skirt also featured large pleats. Zendaya finalized the look by styling her hair in a braided half-up half down look and opted for dangling earrings. Just a few days later, Zendaya was unveiled as one of Maison Valentino’s #ValentinoDiVas. The star, who was named a brand ambassador in 2020, starred in an ad for the label, which shows her in an all-pink look that consisted of a boyfriend button up shirt and slingback heels.

In addition to making herself a fashion icon, Zendaya recently joined the cast of the “Space Jam: A New Legacy.” The star will voice Lola Bunny in the highly-anticipated reboot.

Click through the gallery to see Zendaya’s style evolution.