What the First Ladies Wore on Inauguration Day Through the Decades 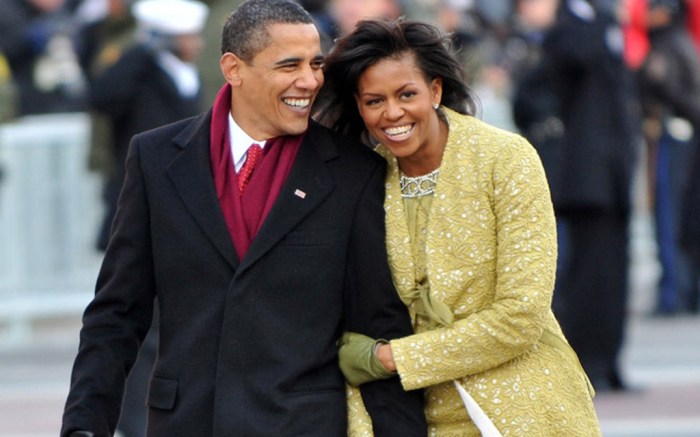 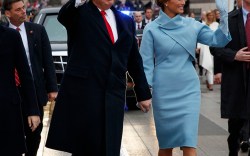 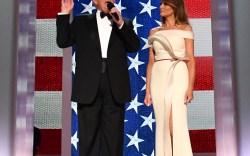 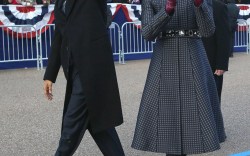 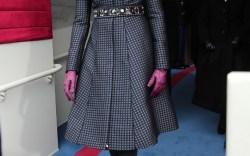 When thinking about the first ladies of the United States, their roles have varied throughout the years, but fashion is always a topic of conversation no matter what their causes are. Whether it’s admiring Jackie Kennedy’s iconic hats or criticizing Hillary Clinton’s pant suits, their fashion choices are continuously analyzed  —  unwarranted or not.

Michelle Obama brought her own approach to fashion into the White House. She came out of the gate making a statement by wearing a white one-shouldered Jason Wu gown at the 2009 inauguration ball. The dress was detailed with floral appliqués. She wore Jimmy Choo peep-toe pumps to complete the look.

From that moment on, it was clear that Obama would be using style to spark conversation. She was strategic with her choices. At the time, Wu, an emerging Taiwanese-born designer, was relatively unknown. That moment — and that dress — launched the designer to national recognition.

Obama’s shoe style ranged through her eight years as first lady, too. She walked down Pennsylvania Avenue in pair of Jimmy Choo heels on Inauguration Day in 2009, and four years later, she chose knee-high boots by Reed Krakoff. Choo has been a constant go-to, but she’s been seen in other labels including Givenchy and Manolo Blahnik.

One thing is for certain: On Inauguration Day, comfort takes priority. Nearly every first lady opted for a short heel during the day’s events. Kennedy was seen in a sleek black shoe style and her famous pillbox hat in 1961, and in 1989, Barbara Bush wore a similar heel style.

The classic black pump seemed to be the trend for inauguration festivities, as seen on first lady Mamie Eisenhower in 1953 and Laura Bush in 2001.

In 2017, however, heel height was taken up a notch at the inauguration of President Donald Trump. First lady Melania Trump wore a monochromatic powder blue ensemble by Ralph Lauren, complete with towering matching stilettos. She set the scene for what her style would encompass over the next four years, which included her go-to Manolo Blahnik’s BB pump and Christian Louboutin’s So Kate shoes.

In just two days, future first lady and former second lady Dr. Jill Biden will make her way to the U.S. Capitol as husband President-elect Joe Biden is sworn in.

Like her predecessors, she will likely be under constant scrutiny for her fashion. Though, similar to Obama, Biden is acutely aware that what she wears can hold much meaning and she seems to already be reframing the focus on her style to be incredibly impactful.

For instance, during the primarily election, she wore a pair of Stuart Weitzman’s special edition “Vote” 5050 boots on multiple occasions. The brand transformed its classic over-the-knee black boots with the word “Vote” displayed boldly across the back of the design in silver font. As part of the initiative, 100% of the proceeds from the boots’ sales were donated to I am a voter., a nonprofit and nonpartisan organization working to encourage voter turnout across the country across all party lines and beliefs.

At the 2020 Democratic National Convention, Dr. Biden wore a design by Christian Siriano. The simple ensemble was elegant and fashion-forward, seen in sleeved wrap-dress silhouette. Wearing designers such as Christian Siriano makes a statement all in itself and it goes beyond fashion. Siriano represent inclusion and equality for all. He has been vocal many social issues, from LGBTQ equality to the Black Lives Matter movement. He has also been leading the fashion industry in creating masks for consumers amid the coronavirus crisis.

2021 marks a historical moment as the United States finds it first second gentleman in Kamala Harris’ husband Douglas Emhoff. Vice President-elect Harris will also make history as she becomes the first woman to take the vice presidential oath of office on Jan. 20.

To see more first lady fashion throughout the years on Inauguration day, click through the gallery.